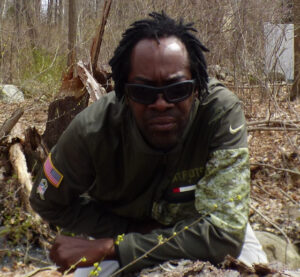 Veteran emcee Dagha has returned to the mic after a break that lasted over half of a decade. The Boston, Massachusetts native reconnected with his band mate in The Real Dag-Duo, DJ Real, to create a brand-new body of work. The result is a project that hearkens back to the golden era of Hip-Hop titled “D-A To The G.”

D-A To The G is produced entirely by DJ Real. The 11-track release features appearances by Ruste Juxx and Dagha’s partner in rhyme, Cloke.

Dagha chatted with The Real Hip-Hop about his hiatus from rap, why he believes some people reject science, and his new album, D-A To The G.

TRHH: Why haven’t you released an album in over six years?

Dagha: I think I put Rap Fantastic out in 2014. I got married in 2015, I had twin girls in 2017, I think I bought my house in 2018. I had joints ready to go after Rap Fantastic. We were in a pretty good position to put something out, but then DJ Real’s hard drive crashed. He sent it to Canada and California and they couldn’t recover the files. It was crazy. He had to go back and re-sample and re-produce everything. It took some time. A lot of excuses and a lot of life stuff.

TRHH: What is it about the production of DJ Real that brings out the best in you?

TRHH: You worked with Ruste Juxx on the song “Black Trucks” and there’s a little nod to Prodigy in there. How did that song come together?

Dagha: I always was a Juxx fan since back in the days when I first heard him with Sean P. When Real sent the beat, we were just talking. I’ve never been heavy on features. I’ve always been really selective about the features that I do have, but I really wanted a feature for this one and Ruste was at the top of the list. We’ve been talking about it for a minute. I just like his grind, his voice, and his energy. I reached out to him and soon as he heard the beat he was like, “yeah, okay” [laughs]. I already had the concept about black trucks and rap cats acting like they’re FBI informants. He was loving it and we just went from there. It was dope that he opened up his arms to me and gave me that opportunity.

TRHH: Who came up with the concept for the “Check Me Out Y’all” video?

Dagha: That was my man Mike Silva. My full-time job, which is another reason why I haven’t put an album out in the last seven years, I work with inner-city youth for a non-profit after school program, I met Mike through that. He came through and saw me when I was mentoring these two girls during their poetry session. We started talking about music and the next thing you know he was like, “Yo, I wanna do a video for you.” I told him about this project and he came up with the whole treatment. I give him all the credit for that. It was dope because we got to include the kids in the program. We got to teach them about fashion, set design, story boarding, and all kinds of stuff. It was pretty dope.

TRHH: How rewarding is it doing the work that you do at Boston Scores?

Dagha: It’s everything to me to have a 9-to-5 where you don’t have to sacrifice your passion. Before Scores I worked for John Hancock as a senior control analyst for like ten years. Then I tried to do this Hip-Hop shit independently. I signed to Lewis Recordings and dropped The Divorce, but it just wasn’t enough. I actually have a job where I can create songwriting curriculum and film making curriculum. I partnered with Mike on a film making program that we’re actually rolling out to inner-city youth in September at the Greater Egleston High School.

TRHH: I can’t imagine having a job where you can be fulfilled and help people at the same time, and like you said, not compromise.

Dagha: It’s pretty dope, man. I didn’t plan it that way, but I just stayed true to what made me happy and what made an impact on my life. If I can go and do a winter program at a school in Roxbury for like four weeks and help elementary school kids come up with a rap song and a video, that’s the dopest shit to me. As small as it seems, it’s a feeling for me.

TRHH: On the song “Knowledge over Faith” you have a lyric that says “it’s either science or it’s silly.” Explain what you mean by that line.

Dagha: I just feel like facts are facts. Knowledge is just knowledge. There are a lot of things out here that cloud the facts and the knowledge. Science is what it is. Science is based on facts. There’s just a lot of silly conversations going on right now as far as climate is concerned, as far as vaccines are concerned, and as far as your diet is concerned. The knowledge is out there for us to inform ourselves instead of us being told what it is and what it should be. We didn’t have the convenience twenty-five years ago. It’s out there, people just have to look for it. That’s basically all it is. I didn’t wanna get too deep on it, because it can get very deep. I think that’s the beautiful part of Hip-Hop. It’s all on the individual listeners perception and how they interpret it. But I put it out there for conversation. Thanks for asking, for sure.

TRHH: You’re welcome. Why do you think so many people reject science these days?

Dagha: I think the media controls the masses. I feel like people aren’t taught to think independently. They’re taught to memorize stuff and regurgitate it like they’re owls or some shit. That’s the whole education system. It really breaks down to that. We really have to reform the education system because they’re teaching us to memorize stuff, and the stuff they’re teaching us to memorize is detrimental to society overall. Let’s get more inclusive with shit. Let’s get more perspectives. I feel like facts are facts. When people get distracted from facts, or science, which is based on facts and data, I think it’s a typical thing. Eighty-five percent of us are dumb, deaf, and blind. We just go with what we’re taught.

TRHH: Who is the D-A To The G album made for?

Dagha: That’s a dope question, man [laughs]. I think it’s made for anyone that likes any kind of combination of rawness, dope production, lyrical wordplay, comedy, rawness, knowledge, just dope shit. Anyone that’s a fan of that shit, whether they’re from the 80s or 90s. I’m often called an OG or that I’m stuck in this boom bap shit, but I got a lot of shit I’m sitting on right now. I think D-A To The G is made for straight connoisseurs – them cats that know what’s up – and that’s why I pressed it on vinyl. It’s a little bit different from what I’ve been doing lately. I got distro through Traffic. I started my own record label through this. I want to continue this and bring this through the education system. It’s for those that know what’s up.

Purchase: Dagha – D-A To The G

Sherron Shabazz is a freelance writer with an intense passion for Hip-Hop culture. Sherron is your quintessential Hip-Hop snob, seeking to advance the future of the culture while fondly remembering its past.
View all posts by Sherron Shabazz →
This entry was posted in interview and tagged Black Trucks, Boston, Boston Scores, Check Me Out Y’all, D-A To The G, Dagha, DJ Real, interview, Knowledge over Faith, Massachusetts. Bookmark the permalink.