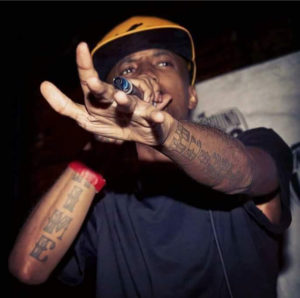 H2SO4 also known as sulfuric scid is a chemical compound that is highly corrosive and extremely hazardous. It’s used in everything from batteries, to fertilizers, to bombs. Keeping with the theme of being hazardous to ones health, “Sulfuric Acid” is also the name of an album created by one of BK’s finest, Ruste Juxx, and French producer Zealot of FWM.

Ruste Juxx spoke to The Real Hip-Hop about Sulfuric Acid, working with Zealot of FWM, and his mentor, the late, great Sean Price.

TRHH: Why’d you chose the name “Sulfuric Acid” for this album?

Ruste Juxx: [Laughs] I’m always thinking of some ill shit. That name is just self-explanatory. That’s my motherfuckin’ style, man. That shit burns through every motherfucking thing. The album is so sick. With the lyrics and production combined, I think that was the best title to come up with.

TRHH: How did you hook up with Zealot?

Ruste Juxx: Online and shit. Just like I be doing with a lot of features and different collabs and shit. He hit me up online two or three years ago and we’ve been knocking out joints ever since.

TRHH: My favorite beat on the album is “Bang Ya Head.” How did you feel when you first heard the violin?

Ruste Juxx: That was a gloomy sound, that’s why I said that shit in the intro. His style of production just put me in another fuckin’ zone. I had to lay those lyrics accordingly.

TRHH: The last time we spoke you dropped the International Juxx album. You work with a lot of artists from overseas; what’s the difference between European Hip-Hop producers and American Hip-Hop produces?

TRHH: The verse you spit on “Wig Shot” is one of the realest I’ve heard in a while. What inspired you to write that rhyme?

Ruste Juxx: Good lookin’. I was reading up on this shit on what happened after the Civil War with black people and everything and I was just infuriated. When I heard that beat I laid all of my thoughts on everything I was reading into that verse.

TRHH: You spit a verse on the Dirt Platoon album too that was hard. That was one of my favorite verses too. I like that you take it there sometimes.

Ruste Juxx: That was another situation that was just crazy. That was just really fucked up. I had to vent some kind of way. Certain beats just speak to me, like, I should speak on a certain subject on this joint. That shit was perfect for that. Nobody was really talking about that. I didn’t hear nobody speaking about the Amber Guyger case so I had to jump on that. That’s not even what they were really talking about on there, so, I had to incorporate that and still make it “jumping over cars” and it fit so perfectly.

TRHH: You have a joint with Term and Bumpy called “Kings Link with Kings.” How did that collaboration come together?

Ruste Juxx: I’ve known Term for years. That’s always been my man. I recently hopped on one of his albums. I got on a joint with him and somebody else called “Roaches.” It was an ill concept. I hit him back like, “I need you for my album,” and he came through like he always do. I had to holla at the legend, the motherfuckin’ icon, Bumpy Knuckles. He was on my eXXecution album back in 2010 with Marco Polo. We linked up and were talking about working on a project together. He was producing and rhyming on it. We were working on that and I sent him this joint as well. It was supposed to be a few more emcees on it, but everybody didn’t get their verse in, in time. It came out so good with us three.

TRHH: We’re coming up on five years since we lost Sean P. I miss him and I didn’t know him, so I know you must really miss him. What’s your favorite collab that you did with Sean?

TRHH: Who is the Sulfuric Acid album made for?

Ruste Juxx: That’s made for Juxxaholics, man. Every time it’s for the fans. I never direct albums or singles toward other artists, that’s just me. I’m a battle rapper by nature, so when I speak that shit I’m speaking in general. I talk that shit about how I’m the best. This is for the fans right here.

Sherron Shabazz is a freelance writer with an intense passion for Hip-Hop culture. Sherron is your quintessential Hip-Hop snob, seeking to advance the future of the culture while fondly remembering its past.
View all posts by Sherron Shabazz →
This entry was posted in interview and tagged Bang Ya Head, Brooklyn, Crown Heights, France, Fuk Wit Me, Kings Link with Kings, New York, Ruste Juxx, Ruste Juxx Meets Zealot of FWM, Saint Denis, Straight out Ya Body, Sulfuric Acid, Wig Shot, Zealot, Zealot of FWM. Bookmark the permalink.