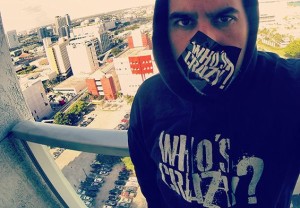 Miami mixtape pioneer DJ EFN dropped his first mixtape in 1993. It’s pretty remarkable to think that his first official album would not drop until 2015, but that’s what happened. This month DJ EFN and Crazy Hood Productions released “Another Time”, a full-length album that combines legendary emcees with some of the best and brightest from the new generation of rap – EFN designed it that way.

The Real Hip-Hop chatted with DJ EFN regarding the Miami Hip-Hop scene, his legendary deejay career, his foray into filmmaking, and his new album, Another Time.

TRHH: Why’d you title the album ‘Another Time’?

DJ EFN: The era that I started pursuing music seriously was ’93 – that golden era, classic Hip-Hop era. It’s my favorite time so far of Hip-Hop music culturally and musically. It’s what basically inspired me to do stuff. I’m paying homage to that era, I’m paying homage to the mixtape career that I launched in ’93 which basically helped me pursue other avenues within entertainment and Hip-Hop. It’s just another time. This project is made with the morals from another time.

TRHH: Why do you think things changed from the way it was during the golden era?

DJ EFN: One of the first key factors for Hip-Hop that changed it, for good or for bad, is how big it got in terms of financial rewards – for companies, for individuals, for artists, for execs, whatever. If you’re someone from the late 80s, early 90s and you were a fan of the music you know there was a very limited fan base and these artists didn’t do it for a payoff. They were invested in the art form and just wanted respect for what they were doing. Whether it was emcees, B-Boy’s, or deejays, culturally you just wanted respect. It wasn’t really a financial gain. Once money was infused into the system it was positive in a lot of ways, but money is the root of all evil. It really took a lot out of the art and it brought in a lot of new people that didn’t care about the progression of the music, the art form, and maintaining certain values within it. The next phase of the problem is technology. Technology has impacted every type of art form, scene, and business. Technology has really had a hand in changing it after money was a big factor.

TRHH: Speaking of technology, you have a lot of artists on this album. How long did it take you to put this album together?

DJ EFN: It took me about six months, really.

TRHH: That’s not too bad.

TRHH: Tell me about the single ‘Lane 2 Lane’.

DJ EFN: It’s a special track because going back to my mixtape series and what I’m known for, what’s important for me on my mixtapes is to provide a quality and consistent mixtape first and foremost for Miami, where I’m from. I want to make sure I’m providing quality mixtapes for the local scene but with the same stuff that they were getting from mixtapes coming out of New York or wherever else. When we were getting those mixtapes people were repping other places because those mixtapes came from other places. It was always important to help promote the Miami identity and the Miami Hip-Hop scene and Lane 2 Lane is one of those tracks on this project that represents me making sure I promote Miami and the local scene. I’m giving you Gunplay who is a veteran but is new to a lot of people so he’s a newer veteran. He’s well respected locally. There is this new guy Denzel Curry who is doing a lot and he represents the youthful side of things and the whole new generation. I wanted to bring those two together and give you a real solid Miami track the way I would do it.

TRHH: What’s the Miami Hip-Hop scene like? I’m 38 so when I think of Miami I think of 2 Live Crew or now Rick Ross.

DJ EFN: Right. I’m 39 so we’re around the same age. I think a lot of cities have had this problem outside of L.A., Atlanta, New York, and maybe Chicago, but we’ve always been trying to fight to get heard and show what our city has to offer. A lot of people think Miami Hip-Hop started with Rick Ross and Pitbull. Although they’re very successful and those are my people, that’s not the case. I’m kind of like one of the last of the Mohicans from a scene that was small but thriving. We had a lot of people that came out of that scene that are important to Hip-Hop like DJ Craze who is like a 5-time World DMC Champion. We had an artist that got signed to Island Music called Mother Superia who ended up getting shelved. Her album that was about to come out had production from Redman, a feature from KRS-One, and her first video was directed by the GZA at the height of Wu-Tang. We had way more emcees than I’m mentioning. We had world renowned B-Boys and graffiti artists, too.

Something that happened that capped the era that I’m speaking of, I wrote an article about this for MTV, but when Mother Superia got shelved and that album never came out I feel like it closed the door on the scene that I’m from. Coming out of that scene you’ve got Trick Daddy and Ross. They aren’t necessarily from the scene that I’m talking about. They are Miami in their own right and have their own scene, but a new scene developed and people felt like that was the beginning of Miami Hip-Hop and that’s not the case. A lot of the first times that you heard Ross or Pitbull were on my mixtapes before anybody was playing them on radio. But I come from another scene so really the foundation of what these guys started from is from another scene altogether.

TRHH: What did it mean to you to get Premier and Buckwild on the project?

DJ EFN: To make it easy on myself and also to put on people locally, most of the production is handled by either friends, local producers that I’m cool with, or producers that I manage under my wing. That was purposely done because it was easier for me to deal with. I did want to have feature production that was just as much of a feature as an artist. Premier was always in my head. If I ever did a studio project I wanted to have Premier. Having Premier is like the pinnacle for any Hip-Hop head. I got Premier and what made that track really special was I asked him if he could cut up these vocals that I had from Guru. Guru hosted some mixtapes of mine and did freestyles for me. I asked Premier if he could cut up the vocals saying, “DJ EFN, Crazy Hood,” and Premier obliged. It was extremely special to me. If no one cared it was special to me and now that I have it it’s never going to go away. I have something really special that I can always refer to and that’s dope. It’s the closest thing to having a Gang Starr record.

I had finished the whole album and I was done but I hadn’t had that Buckwild record yet. I needed one more record and a vibe that I felt like was missing on the project. Me and Buckwild had communicated a lot in the past. He would send beats for other artists that I managed — I manage Mayday and Wrekonize who are signed to Tech N9ne. I had a folder of his and I found that beat. I asked if it was still available and he said it was – Boom, that’s where that record came from.

TRHH: Who spit your favorite verse on the album?

DJ EFN: Aw man I can’t pick one favorite verse [laughs]. I can tell you a couple of favorite verses, definitely Your Old Droog on the Buckwild record – he killed it. Redman is one of my favorite emcees of all-time, he murdered it for me. I hope this doesn’t sound like a diss but I was actually surprised by Stalley. He just murked the Premier record.

DJ EFN: I knew his stuff but I hadn’t really paid as much attention until I started looking into him and tried to get him on the track. What he returned to me was more than I even expected.

TRHH: With over 20 years in the game to what do you attribute your success?

DJ EFN: Personally I believe in consistency. In whatever you do, stay consistent. Even if times are tough for you and it’s hard to be consistent, whatever you’re putting out there be as consistent as you possibly can. Be consistent with product, quality, relationships in terms of the people you’re dealing with, and be honest too. I always tell people it’s nothing wrong with hustling but polite persistence is the best way to get things done. It’s hard for people to diss you when you’re being polite. Even though they want to because you’re being too persistent, but you’re being polite about it and respectful. People can’t diss you for that.

TRHH: What’s next up for Crazy Hood?

DJ EFN: I’m managing my artists Mayday and Wrekonize. They’re doing their album on Strange Music. We’re setting up their national tour and a Canadian tour – that’s big on the plate. I’m going to continue to promote this project because I’m very aware that we live in the internet age where stuff comes out and it’s gone in the ether. I’m going to continue to put it in people’s faces until it finds an audience that appreciates it. I know that I can’t stop because it’s tweeted out in the world. I’ll continue to promote it and do remixes and stuff.

Another big thing on my plate is I started a film company with a business partner of mine. It’s branched off from Crazy Hood Productions and it’s called Crazy Hood Film Academy. We have these film project that we’ve been putting out in a series that I came up with where we’re exploring different countries through their Hip-Hop scene. The first movie was Cuba, which is my parent’s homeland. It got picked up by Revolt TV. We just signed a licensing deal for the next two series’ which is Coming Home: Peru and Coming Home: Haiti. They’ll air in March and in May. We have short films too. One of our short films just got picked up by Cannes Film Festival in France. We’ll continue to push the envelope on the film side. It’s completely new to me. I don’t consider myself a filmmaker but I have ideas and visions and I’m going to execute them the best as possible. If people like them, cool, that’s dope.

Sherron Shabazz is a freelance writer with an intense passion for Hip-Hop culture. Sherron is your quintessential Hip-Hop snob, seeking to advance the future of the culture while fondly remembering its past.
View all posts by Sherron Shabazz →
This entry was posted in interview and tagged Another Time, Coming Home, Crazy Hood, DJ, DJ EFN, interview, Lane 2 Lane, Miami. Bookmark the permalink.