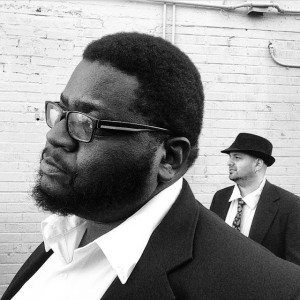 The days of rap duos are seemingly dead. The early 80s meteoric success of Run-DMC spawned acts like EPMD, Salt-N-Pepa, De La Soul, and Mobb Deep to name a few. For whatever reason (ego, greed, and/or divisive record companies) Hip-Hop has been all about the soloist in recent years, but that trend appears to be changing.

Philadelphia raised artists Mega Ran and Storyville have joined forces under the banner of “Soul Veggies”. The group’s new album of the same name is a carefree project that harkens back to the days when Hip-Hop was fun.

Mega Ran and Storyville spoke to The Real Hip-Hop about the formation of their group, the importance of being funny on the microphone, and their new album, Soul Veggies.

TRHH: How’d you guys link up to do this album?

Mega Ran: We’ve been linked up for a long time, actually. We’ve known each other for ten years. We’re both from Philly. We were in a rap crew together – RAHM Nation. We met through a guy named Ohene, a dope artist who was also a teacher at a Hip-Hop class at Temple. The class was kind of a talent scouting operation. When he found out we were dope and doing some cool stuff he would link us all up. I met a lot of the guys that I still work with today through that union. That was back in like ’04 in Philly. We started working on my first record together. I knew Storyville could rhyme but I didn’t know he could produce or do other stuff. Turns out the dude is like a multi-talented, multi-faceted cat. We continued to make more and more music from there. He produced one of my favorite songs from the first album, a song called ‘Push’. From there we just kept on working and built a great relationship. I moved to Phoenix a few years later and he moved to Boston but we still maintain contact and hit the road when we can. I figured it was just time. Maybe three years ago we started working on this record. Every time I’d come home to Philly to visit we’d record a song. It was one song after another until we had an album. Next thing you know it was ready so we just put it out, but it was literally three years in the making — maybe ten years in the making actually, but at least three.

TRHH: What does the title “Soul Veggies” mean?

Storyville: Soul Veggies mixes the two ideas behind the record which is that it’s an organic record with a lot of heart in it, that’s the soul. The veggies is like, we’re not taking ourselves too seriously. Yes, it’s vegetables for the soul but we’re not taking ourselves too seriously. It’s primarily a fun record. Also we both like to play video games so when you play video games you’re vegging out.

Mega Ran: Absolutely. It’s the combination of just making organic music from the heart and soul and vegging out on pop culture, TV, video games, or whatever it might be.

TRHH: The video for ‘React‘ is incredible, who came up with the concept?

Storyville: It was Cardoza, wasn’t it?

Mega Ran: I think it was the director Mike Cardoza. We had a bunch of different ideas but his ideas took it over the top. He was like, “Yo, I want some gangster Reservoir Dogs style thing,” and I was like, “Perfect, that’s one of my favorite movies.” Any time I get to put a suit on I’m down with it. It was a fun record. I wanted to make sure we had some scenes of B-Boy’s but he crafted the story around that. It was super dope, man. A lot of people say it’s like Beastie Boys’ ‘Sabotage’ style where it’s a chase and an old Dragnet style thing. The director Mike Cardoza who also produced and directed my documentary did that and he did a great job. He really knocked it out the park. I love coming to people with a concept and have them taking the concept to another level rather than them saying, “Yeah, yeah, I’ll do that.” He truly directed that video. He had a great idea and executed it to perfection.

TRHH: Is injecting humor into your music premeditated or does it just come out naturally?

Storyville: [Laughs] That’s a good question. It depends on the song. Ran and I both come from the freestyle era where people come straight off the top. A freestyle didn’t mean a written that didn’t belong anywhere, it meant improvised. We both incorporate a lot of that into our writing styles so a lot of the humor is sometimes goofy. There is a rap where I say, “You ever throw metal into a microwave/Well it’s worse with plutonium.” I was just saying random stuff out loud and it worked itself into the rap. The concepts a lot of times are premeditated so it’s both.

Mega Ran: I had to learn that through the years. I think working with Storyville helped that. I came from an era in the early 90s where a lot of Hip-Hop was hard. It was Timberland boots, skully’s and hoodies and it was hard. It was cold hard rap. It took me a while to be able to accept that I like to laugh and I like fun stuff. Why can’t I put that in the music? It started to come naturally. It was more or less trying to live up to the name that I’ve given myself, which is “Random”. I attempted to be unpredictable on the microphone and then it just started to come natural.

TRHH: What inspired the song ‘Rappin’ About Rappin’’? I’ve noticed a lot of backlash in recent years aimed toward rapping about rap, but I’m a fan of it. It’s what I was raised on.

Mega Ran: Me too! I love it. I hope people get this and I’m glad you asked, but we’re poking fun at ourselves. We’re from the school of old where it’s all about rapping about how dope you are. Unfortunately a lot of guys do it and you can almost tell that they aren’t necessarily the most talented at it if they spend a little too much time doing. Homeboy Sandman comes to mind – an incredible emcee who never raps about how awesome he is. It can happen and you can still see how great you are by just saying how silly you are, how you watch a lot of TV, or your last girlfriend broke up with you because you didn’t eat healthy or something like that. I came from that school so we’re just kind of poking fun at ourselves and the movement that we came from. A lot of guys continue to do it, but not a lot of guys are doing it at a high level. Story has a line that says, “My lyrics are lyrical/I deliver them like delivery.” [Laughs] These are the things that might come out when somebody is trying to flex so hard that they might neglect a pattern or a style instead of repeating the same word over and over again.

Storyville: With Rappin’ About Rappin’ it was originally making fun of that very hard backpacker movement, which is also the movement that I came from. If you check the track listing you’ll see that Rappin’ About Rappin’ comes right after ‘Artillery’, which is a rap about rapping. We’re definitely making fun of ourselves. The beat that I had in mind was also a trap beat so it’s also making fun of that, “I’m swaggy because I’m swaggy.” There is so much restatement of everything in Hip-Hop that you might as well be saying, “My lyrics are lyrical, son.” [Laughs] Okay but maybe let’s rap about something too. We can find a balance.

Mega Ran: It’s all about the balance. Like he said the track listing defines that because the song before we’re just rapping. So we’re just rapping about rapping and then there is a song called Rappin’ About Rappin’! The irony of it is what’s supposed to catch people.

TRHH: Will there be a sequel to Soul Veggies?

Storyville: Oh Gosh, it’s too early to say that. First of all there’s been prequels already and there will be sequels in a sense that Ran and I have been working on music together for ten years already now. Every time Ran does a project I’m involved and I wanna be involved. I’m going to give an effort to be as involved as possible. So on that level, yes, absolutely. Now will there be a Soul Veggies 2? I don’t know.

Mega Ran: Time will tell and in pop culture if the people want it bad enough it’ll happen. Spider-Man is now part of the Marvel Universe and is going to be a part of the next couple Marvel movies. We didn’t think that was possible because Sony owns Spider-Man, but if enough people want it it’ll happen. Honestly the people out there that are reading this you can decide if there will be a Soul Veggies 2 by speaking with your hearts and wallets and telling a friend of course. If y’all like it and if y’all want more you’ll definitely get more. Like Story said, he’s on every one of my projects. You could take every piece of every song that we’ve done and it would be like Soul Veggies 0.5. It’s very possible.

Sherron Shabazz is a freelance writer with an intense passion for Hip-Hop culture. Sherron is your quintessential Hip-Hop snob, seeking to advance the future of the culture while fondly remembering its past.
View all posts by Sherron Shabazz →
This entry was posted in interview and tagged interview, Matthew Weiss, Mega Ran, Mega Ran & Storyville, Random, Rappin’ About Rappin’, React, Soul Veggies, Storyville. Bookmark the permalink.