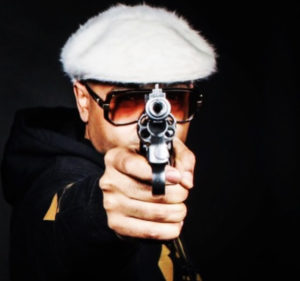 Less than a year after the release of his debut solo album, Crystal Pianos, DNTE has returned with a new release called “Grandizer.” The Toronto native crafted a short but sweet sample-heavy release that’s sure to appeal to fans of avant-garde lyrics and boom bap addicts.

The Real Hip-Hop spoke to DNTE about his foray into production, bouncing back from relationship drama, and his new album, Grandizer.

DNTE: When I was a kid I used to watch these old school Japanese robot, anime movies. There was a TV series called Force Five. Grendizer was one of them and I was obsessed with Grendizer. I just had a baby boy, so I wanted to do something different. I remembered Grendizer so I kept it just like that — back to my childhood.

TRHH: You produced all of Grandizer, what made you decide to take on the entire project yourself?

DNTE: I just wanted to do something different. I thought I could produce myself. When I did Crystal Pianos I ended up producing a track called “MK ULTRA” and then I got the producers bug. So, I was like, “I can do this shit myself” and then I started working on beats. The shit started to cater to my style and it was a wrap. It came out great.

TRHH: The beat change on “Snkrbox” is crazy. Take me into the production of that song and why you decided to switch up the beat.

DNTE: Thank you, man. I appreciate that. The first part of the beat I had my boy Wyze Wonda on it. I had this next beat when it switched up and I wanted to use it on the album on a separate track. My brother was like, “What do you think if we put those two songs together?” I said, “Fuck it, let me try it” and the shit came out crazy. I love that shit. It was crazy in the studio that day, too. It was actually my brother that told me to do it.

TRHH: I love the production on this album, man.

DNTE: Thank you, man. It took me about six months.

TRHH: To do the beats or record the entire thing?

DNTE: Just to do the whole thing – do the beats and go to the studio and knock it out.

TRHH: You have a lot of basketball references on the album. Are you a big basketball fan?

TRHH: But you referenced Chauncey Billups and VanVleet…

DNTE: Yeah, yeah, yeah. I love basketball, man. I grew up playing basketball back in high school. A lot of references came out that way. Remember Detroit when they won the championship with Billups?

DNTE: That shit was crazy. I went for the Detroit Pistons, too.

TRHH: Are you a Raptors fan or just a fan of basketball in general?

DNTE: Just a fan of basketball. It sucks because right now the season is done apparently.

TRHH: That’s what they’re saying. I’ve never seen anything like this.

DNTE: Me neither, man. It’s ridiculous. People wearing masks and you gotta stand up in a lineup to get food and groceries.

TRHH: It’s necessary, but it’s a pain in the ass. I’ll deal with that if it means I get to live [laughs].

DNTE: Right, right. How is it going down there? It’s pretty crazy, right?

TRHH: Yeah, Chicago is crazy. We’re one of the worst cities in America for this shit. A lot of people are dying and it’s mostly black people.

DNTE: A lot of people don’t take it seriously. Down in Toronto everyone is roaming the streets, having house parties and shit, they just don’t give a fuck right now.

TRHH: We all think we’re invincible. We think the shit can’t happen to us.

DNTE: I’ve never seen anything like this and the shit’s been going on for a minute.

TRHH: I can see this going for a year.

TRHH: They said they won’t have a vaccine until January.

TRHH: [Laughs] They gotta come up with a cure for this. It’s going to take time. In the meantime, we gotta keep doing the same shit. Baseball will probably be cancelled, concerts…

TRHH: [Laughs] Well, that’s a positive. The last time we spoke was a year ago when Crystal Pianos came out. How have you grown as an artist since then?

DNTE: Just perfecting the beats. I’m getting more into the production side of things. This album has a lot of passion because a lot of crap happened in 2019 after Crystal Pianos. If you listen to the album you’ll be like, “Oh, man. This nigga went through some shit!” It’s crazy. I got my little son on the front cover. Just the beats – trying to perfect the beats and get better.

DNTE: I’d have to say “Excuses or Results” is my favorite one.

DNTE: Every man goes through some baby mama bullshit, right?

DNTE: [Laughs] My niggas go through some baby mama bullshit and I’m not making shit slide so I’m like, “Fuck this shit. I’m going to speak on everything.” That song hit me hard. Some of these women out here are making a lot of excuses but have no results. Gotta go through hell to come out right.

DNTE: Shit, sky’s the limit, man. Just trying to let everybody hear it, reach all the people, hope everybody likes it, and move on from there. Everything is passionate, bro. I went through a lot of shit in 2019. Hopefully everybody can take it in. I know a lot of niggas out there are going through shit too with their old lady. You just gotta come out right. You remember when Nas and Kelis had that big fuckin’ divorce shit poppin’ off and he did Life is Good?

TRHH: Situations like that you can only learn from them.

DNTE: Right? Learn from them and move on.

Sherron Shabazz is a freelance writer with an intense passion for Hip-Hop culture. Sherron is your quintessential Hip-Hop snob, seeking to advance the future of the culture while fondly remembering its past.
View all posts by Sherron Shabazz →
This entry was posted in interview and tagged Canada, Danguard Ace, DNTE, Excuses or Results, Grandizer, interview, Ontario, Snkrbox, Toronto. Bookmark the permalink.