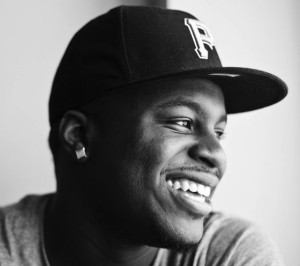 From Chicago’s North Side, Rap artist Jahzel has created a sound that mirrors his surroundings. The North side of the Chi is more diverse than Chicago’s much-publicized West and South sides. Immigrants from Europe, Asia, South America, and Africa primarily make their homes on the city’s North Side. That diversity lends itself to Jahzel’s music.

“I actually never felt like I super fit in any place,” Jahzel said. “I was either too hood or too proper, but I was just me.”

An accomplished songwriter, Jahzel’s sound has evolved throughout each of his projects. His latest release is a mixtape dropping on July 2 titled In God’s Image. Frequent Wale producer, Tone P, produces In God’s Image. The ten-track mixtape features appearances by Noelz Vedere, Mathien, A-Cross, Meagan McNeal, and Whitney Rene.

Jahzel spoke to The Real Hip-Hop about the road that led him to Rap, his eclectic brand of music, and his new mixtape, In God’s Image.

TRHH: Explain the title of your new release, In God’s Image.

Jahzel: The reason why I named it In God’s Image is because it’s another way to say I’m just a man, I’m not perfect. Because I’m made in God’s image I might strive for perfection but I may not always achieve it. I talk about certain things that I might have gone through, good and bad, on the entire tape. I’m not a perfect man so at times it may not be smooth. Also as a man or a human being you go through a range of emotions. Some days you might feel righteous, some days you might feel braggadocios. I wanted to communicate that throughout the whole project.

TRHH: Some people may view that as hypocrisy.

Jahzel: Well, you know everybody is entitled to their opinion. I can’t get mad at that. In the bible it says that we are made in God’s image. It’s not me saying I’m a god, no. The bible states that man as a race was made in God’s image until the first couple sinned and we became imperfect. If it sparks a debate, that’s cool but I wouldn’t say I agree with it.

TRHH: How does this release differ from Jet Lag?

Jahzel: Jet Lag was a more laidback concept. I used a travelling theme because that was what I was doing at the time. Jet Lag was hosted by DJ Whoo Kid and this project has no DJ’s on it. I took this serious as more of an album release while Jet Lag was a true mixtape.

TRHH: I read that you have an engineering degree…

Jahzel: I do not have a degree; I’m like a year out. I went to school for engineering. I majored in engineering and minored in computer science. I was always into music and I was trying to start my own business on the side. I started getting success in certain areas and it moved my attention to that so I never finished my degree. I feel like I had to make a decision, do I want to pursue what I’ve been working on for a while or go the safe route? When I got to that fork in the road I decided to pursue my dream and if it doesn’t work out I can always go back and finish up what I started.

TRHH: Who are some of the emcees that inspired you coming up?

Jahzel: Oh man, truthfully when I was younger I didn’t listen to a lot of music. We didn’t have the money to buy CD’s. If you were on the radio I heard you [laughs]. My parents were kind of strict and I couldn’t listen to a lot of things. It wasn’t until high school when I got the chance to buy a CD and the first CD that I bought was Jay-Z’s Volume 2. Jay-Z’s wordplay was crazy and that type of style influenced me. Also Biggie and Nas, I’m more so into the 90’s Hip-Hop that had strong lyrics and strong beats. Kanye of course, I’m from Chicago and he’s amazing. His creativity, communication, and bravery; he’s not afraid to try anything. Even if it may not work with the public he’s not afraid to try it.

TRHH: What’s your opinion of the Drill scene in Chicago and artists like Chief Keef?

Jahzel: As an artist I feel like music is about expressing emotion or things that you’ve been through, Drill is a form of that too. Some people feel a certain way and choose to use Drill music with heavy 808’s to express that emotion. My style isn’t Drill but I don’t hate on it. I’m not self-righteous, some days I feel Nas-lyrical and talk about serious subjects, some days I wanna wild out when I hear Drill music. I’m glad for the scene and I’m glad for that outlet of expression. It actually brought mad attention to the city. You see other artists from Chicago coming up because of the attention that Drill has brought to it. I rock with it. Chief Keef just expresses what he’s going through and what he feels. I can’t get mad at that. If you understand music in itself you can’t really get mad, that’s what Hip-Hop is all about.

TRHH: Rhymefest said Chief Keef was a nuclear bomb. What about the people that say Drill is a negative influence on younger kids?

Jahzel: I can see where people say that they’re glorifying shooting and murdering, but at the end of the day these things really exist in the city. These are serious problems that we are having. I’m not into glorifying anything that’s destroying the community but I’m all about bringing light to these situations. These are real subjects, whether you hear it in the music or not they need to be addressed. Chicago is known for the homicide rates rising and an artist like Chief Keef is talking about it. If Rhymefest came out and said he didn’t like it, I can understand that. But at the same time it’s art and he’s expressing serious issues. Think about when Hip-Hop was starting you had smooth rap, good skill rap, and then you had the emergence of Gangsta Rap. People were talking about real issues as crack was rising through America. I feel it’s very similar now with what’s going on in our city.

TRHH: I don’t want to harp on this too much but I think it’s an issue of how you deliver the message. You mentioned Gangsta Rap and people’s problem with Gangta Rap was the language. If you go back to 1980 and Grandmaster Flash & The Furious Five, Melle Mel talked about the same things, “Broken glass, everywhere/People pissing on the stairs, you know they just don’t care..” He talked about the same stuff eight years before Gangsta Rap and it wasn’t regarded as a negative. It’s the language that some rappers use that bothers people.

Jahzel: I do understand that but when I think of the emergence of artists that came after Ice-T and N.W.A, they were talking about the crack dealings and shootings. I feel history repeats itself. I see Lil’ Durk and Chief Keef talking about things that are going on just like Ice-T talked about crack dealing and cop killing. We may not like how they’re saying it, but at times I feel that we need to look past that and toward the real issues. Back in the 90’s people were like, “Why are these guys so angry? What’s going on? Why are they talking about killing and females and pimping?” These are the things that people are really seeing. If people say that these guys needs to communicate in a way that’s more positive for the community, that’s definitely legitimate. But we also need to look deeper into the problem and say, what’s going on? What can we do to change this so the next artist coming up can talk about different situations that they see going on? I try to look past the initial way it’s being presented and focus on the meat and potatoes of the complete problem.

TRHH: How would you classify the Jahzel sound?

Jahzel: I was born in Chicago so I’ve seen a lot of things. Being in the middle you get all types of music, South, East, West. I feel like I’m kind of like that. My songs are based on lyrics first and foremost. It’s not enough to have a hot beat and decent lyrics. I feel like to progress and move forward with the culture you always have to be innovative and create something new. All my songs are based on strong lyrics. When I first started rapping metaphors and freestyles battles were big. I feel like to take it to the next level your lyrics should have not one good meaning at face value, but two or three meanings. When people break it down and decode it they’re like, “Oh, I didn’t know it had 2-3 meanings!”

I go through different emotions. I’d be a hypocrite if I said I’m conscious and listen to Lupe Fiasco all day! I’d be lying. I like Lupe but I might be in the club having a drink and if Chief Keef comes on I might rock to that. I feel like my music is real and talks about real things. Pac was one of the first people to do that too. People say Pac was a hypocrite but that’s really what he was going through. I can’t say as a human being 24/7 I’m going to feel the same way for the rest of my life. Sometimes I’ll talk about women, good or bad. Sometimes I might feel braggadocios and talk about the way we’ve gotten to the point where we are now. Sometimes I might talk about my relationship with my mother and how it’s not that strong. Sometimes I might I talk about having a good Saturday night. It’s a range of emotions and my style captures that and communicates that to the listener.

TRHH: What’s your ultimate goal in the music business?

Jahzel: Every musician when they first start just wants to get respect for your art. You want people to hear it and listen to it. I would like to support my family on it so I can do it 24/7, that’s cool. But I would like to spread my music and my message and relate to the people across the world.

Sherron Shabazz is a freelance writer with an intense passion for Hip-Hop culture. Sherron is your quintessential Hip-Hop snob, seeking to advance the future of the culture while fondly remembering its past.
View all posts by Sherron Shabazz →
This entry was posted in interview and tagged Chapters, In God’s Image, interview, Jahzel, Jet Lag. Bookmark the permalink.