From The Vault: Warren G 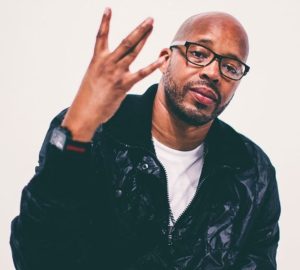 Five years ago on this day I started this very website. After years of interviewing artists for other outlets I wanted to start my own thing and showcase artists that I felt represented the culture in a proper way, thus TheRealHip-Hop.com.

When the websites that I’d previously written for vanished all of my old content was gone. I decided to re-publish many of those old artist interviews in the “From the Vault” series.

On the 5-year anniversary of TheRealHip-Hop.com it’s fitting that I dig into the vault and present to you my interview with Warren G. Warren is without question the nicest person that I’ve encountered in Hip-Hop. He’s also the first big name artist that I ever interviewed. What better way to celebrate The Real Hip-Hop’s birthday than with the purveyor of G-Funk, Warren G.

I spoke to Warren in September of 2009 as he was preparing for the release of his sixth solo album, The G Files, and a subsequent tour. Warren G and I spoke about The G Files, his time on VH1’s Celebrity Fit Club, his favorite producer on the mic, and his big brother Dr. Dre.

TRHH: The new single from The G Files is called Swagger Rich with Snoop Dogg — tell me about that song.

Warren G: It’s a song I put out as a feeler to get the buzz going. Swagger Rich is a record where I just wanted to try something different. What they’re playing on the radio is that electro-Hip-Hop. I just wanted to try one of those types of songs. I was like, “Who can I put on here to rock with me just to be different?” I was like, “Let me put Snoop on there.” I put him on and we put it down.

TRHH: Swagger Rich also features Australian singer Cassie Davis. There are some unlikely collaboration’s on The G Files. Tell me how the Cassie Davis and Travis Barker songs came to fruition?

Warren G: Well me and Travis we’ve been working, doing shows and stuff. We were working and I was like damn, I’m here with this guy who is an incredible drummer. I said I need to put him on my album because he’s incredible. I just got at him like, “Travis can you do the drums on this song for me?” He was like, “Yep!” I sent it to him, he put ’em on and boom! That was it, after that it was a wrap. The record was poppin’ even more.

TRHH: You always brought new artists to the forefront on your albums. Tell our readers about the new artists on the album.

Warren G: Well I have Badd Lucc, Halla, Blacc Nicc, BJ, Juney Boy, Trevor Westly, and Christian Davis. All of those guys are very, very talented. My job is to help them get a shot at possibly getting signed by a record label. That’s kind of what I do on each album. I try to give people a shot to get theirs, ’cause I ain’t greedy. If that’s what you do let’s try to get it crackin’ for you. I know you got the talent, I know you can do it. Let’s try to use my avenue and make it happen.

TRHH: You were one of the original rapping producers to make it big along with Dr. Dre, DJ Quik, Erick Sermon, RZA, and others. For your money, who is the greatest rapping producer of all-time and why?

Warren G: Because he kind of reminds me of myself. He loves the soulfulness. He loves a beautiful sound. He doesn’t get too hardcore. He got that real soulfulness with a touch of jazz, and that’s kinda like how I am. I can roll with that.

TRHH: Hip-Hop production has moved more toward software than hardware recently. What equipment or software do you use when you’re making beats?

Warren G: I started out with the MPC 60. Now I’m using the MPC 5000. It’s just an incredible piece of machinery. It helps me keep my timing right. I’m able to use MIDI keyboards and my computer. You can link everything up to it. That’s what’s so good about it; you can use it as a controller also. I work with a lot of plug-ins inside of Pro Tools. That’s basically it. You get the same results.

TRHH: What’s your favorite beat that you made for another artist?

Warren G: I produced a song for 2Pac and MC Breed called Gotta’ Get Mine. That’s probably one of my favorites. That’s one of my first songs that got a shot when I was trying to get noticed. It actually was my first record to get noticed.

TRHH: That’s definitely a classic! And that song is so much more special now since both of those brothers are no longer with us.

TRHH: The single Ringtone is great. Is that a flute that you used on that record?

Warren G: [Laughs] Yeah! Yeah that was a flute. I try to be different in my production so I just put a flute on there. A flute is a nice sound that a lot of producers don’t use. It’s like a quiet storm basically. But they’re going to start using it now since they heard me do it.

TRHH: [Laughs] Was it live or sampled?

Warren G: It was done through a keyboard. My boy Craig Boogie had put that on there.

TRHH: You appeared on VH1’s Celebrity Fit Club a few years back, were you able to implement the things that you learned on the show into your life after the show ended?

Warren G: Yeah! Working out and eating better. I’ve been messing up lately, I ain’t gonna even lie. But I usually try to eat pretty cool. I’ll eat baked chicken breast, vegetables, and brown rice. In the morning I’ll eat egg whites mixed with spinach, garlic, and mushrooms with lentils. I try to eat pretty cool, but lately I’ve been messing up a little bit. I’ll bounce back.

TRHH: I have to ask, did anyone really want to beat the shit out of Dustin Diamond on the show?

Warren G: Yeah, they wanted to kick his ass. Harvey [Walden IV] wanted to brutalize him. I was like wow! I thought he was just bullshitting at first but he was serious.

TRHH: He would have hurt that guy.

Warren G: Yeah, he would have hurt him pretty bad.

TRHH: People give rappers a bad rap but it seemed like the rappers are the only people on that show with good sense.

TRHH: Nate Dogg appears along with Raekwon on The G Files song 100 Miles and Runnin’. Can you give us an update on Nate’s health since he suffered a stroke?

TRHH: You were the artist that brought Def Jam back from the dead in 1994, what was it like performing at VH1’s Hip Hop Honors paying tribute to Def Jam Records?

Warren G: I mean, it was cool. It was a great thing to see Russell, Lyor, Chris Lighty, Kevin Liles, Mike, and Julie it was just nice to see them. They honored me and I honored them. To myself I was like, “Wow I sold 10 million records for them which made them 100 million dollars and put them back in the game.” I felt good, I basically felt like it was my thing [laughs]. They gave me a shot when nobody else would give me a shot. That was the result of them being real with me and I kept it 100 with them.

TRHH: You’re doing a 20 city national tour this fall. What do you have in store for fans that come and see the show?

Warren G: I’m gonna do some of the new songs off the album. I’m gonna give ’em a piece of every album I did. And just do a good show. Just rock it for ’em and have a good time.

TRHH: About 10 years ago you hit the road with Dr. Dre, Snoop Dogg, Ice Cube, and Eminem on the Up in Smoke Tour. We keep hearing that Dr. Dre’s final album Detox is coming, is there any chance that we can get an Up in Smoke 2 in the summer of 2010?

Warren G: Well I’m definitely trying to get on that Detox tour!!! I’m on that!! I’m on!

TRHH: Can you confirm that there will be a Detox tour?

TRHH: Did you work on the Detox album?

Warren G: Not yet. I’m just waiting on the call. He’ll be calling me pretty soon. I’m gonna go down there, work with him, and do my thing. The records I’ve heard so far are incredible. It’s real dope. He’s doing his thing.

TRHH: In my opinion he’s the greatest of all time…

TRHH: I think Dr. Dre is going to come with something special because so many people count him out.

Warren G: I can’t wait ’till he drops it so he can shut all this bullshit music down. It’s gonna be a good record man, and I can’t wait.

TRHH: Can you give me an example of the bullshit music that’s out there [laughs]?

Warren G: I’m not a hater. It’s just some shit out there where you just say to yourself, how did this get on the radio? Man…I’m like…wow!

TRHH: Well you did the joint with Raekwon for your album, but have you heard Raekwon’s album?

TRHH: Yeah. That shit is ridiculous. It made me love music again.

TRHH: Hold On is my favorite song on G Files…

TRHH: I think everyone can relate to that song on some level. Tell me what that song means to you.

Some guys may not be able to get a job so they have to hustle to provide for their family and in the process they end up getting caught up. You just have to keep your head up. They won’t give him a job because he’s a felon. So just hold on and keep your head up. It’ll happen, you just have to be positive about it. Even if you have to work at McDonald’s, it’s something. You don’t want to keep getting locked up behind those bars.

TRHH: I appreciate you spending your time with me.

TRHH: Good luck with the new album, I liked it..

Warren G: Thank you so much.

Take a Look Over Your Shoulder

I Want it All

The Return of the Regulator

In the Mid-Nite Hour

Sherron Shabazz is a freelance writer with an intense passion for Hip-Hop culture. Sherron is your quintessential Hip-Hop snob, seeking to advance the future of the culture while fondly remembering its past.
View all posts by Sherron Shabazz →
This entry was posted in From the Vault, interview and tagged 213, California, From the Vault, G-Funk, interview, Long Beach, Ringtone, Swagger Rich, The G Files, Warren G. Bookmark the permalink.