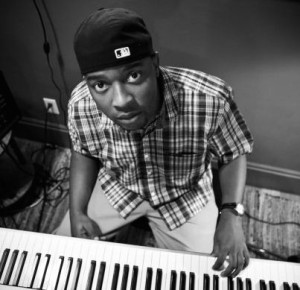 Producer Maja 7th has crafted tracks for various artists with varying styles, including GLC, Add-2, Dominique Larue, and Killah Priest to name a few. The Indianapolis, Indiana native’s music is tailor-made for the artists he works with, but with his own stamp on each track. Maja is set to release a compilation album called “Get Familiar” to allow those who aren’t to do just that – get familiar.

Dropping in May, Get Familiar is a collection of classic and new tracks produced by Maja 7th. The album features guest appearances by artists like Freddie Gibbs, Mikkey Halsted, Mic Terror, L.E.P. Bogus Boys, and Pill among others.

The Real Hip-Hop spoke to Maja 7th about becoming recommitted to record producing, why RZA and the Wu-Tang Clan inspired him to venture into Hip-Hop, and his new album, Get Familiar.

TRHH: Why’d you title the new album ‘Get Familiar’?

Maja 7th: A lot of new people and new supporters, I don’t like to use the word ‘fans’ because I don’t feel like I’m to that level, ask me, “What have you done before I heard this?” I started getting asked that question a lot so I got some of the records that were my favorites, some of the joints I did that got me to this point, and mixed those in with new records that I’m working on just to get people familiar, no pun intended, with me all the way around. That was the whole concept of the album to get some of the new supporters familiar with my older work and also give ‘em some new heat.

TRHH: In the video teaser for the album you said you had to get recommitted. What does being recommitted entail?

Maja 7th: For me there was some life instances that happened. I put out a couple of projects, The Breakout was good for me, and I worked with a couple of artists then I lost my father. My father passed away and it set me back mentally and everything. I had to kind of regroup and sit down and look at myself. Somebody actually asked me, “Yo, are you still working on music?” That bothered me because close friends and family know that’s what I do. When somebody asked me that I had to really look at myself and say, “Hey, you gotta get back out there and get back on your grind. There is so much more material and product to put out. You gotta use your gift.” I got recommitted. I started making beats, contacting artists, and using the relationships that I’d developed. I knocked the dust off, knocked the rust off and just went back in hard. It was a couple things that put me down for a little bit but I had to get back into it. I started putting forth the effort and working on the craft.

TRHH: I lost my father too about six years ago. Unfortunately I can relate to you. How difficult was it for you to get back to normalcy and the everyday grind after losing your father?

Maja 7th: There was a stretch where it was really, really tough. Like you said, that’s a small club that you’re in. Everybody can’t relate to that. You’d have to have lost a parent to understand what that does. It set me back for a little bit because my father was one of my biggest fans. He got to see me on MTV with Freddie Gibbs and Mikkey Halsted when we dropped ‘On My Own’ and the video came on. He got to see me on TV and that was huge to him because he’d always been a supporter. When he passed it was like taking a piece of me away. I had to go through my grieving process. I know it’s different for people, people grieve in different ways and I understand that. I had to sit down and really go through the grieving process because my pops was one of my biggest fans. He used to always tell me, “You’re going to be alright. I know you’re gonna make it.” When he was taken away from me I had to take care of the acceptance portion and accept it, number one. I also had to think about what he would have said. He would have said, “You gotta get back on your grind and go chase your dream. The fact that I’m gone, don’t let that stop you from chasing your dream.” Once I realized that it lit a fire under me. I got refocused, got back on my grind, and now we got Get Familiar.

TRHH: I read that Wu-Tang’s ‘C.R.E.A.M.’ inspired you to become a producer. What is it about Wu that grabbed your attention?

Maja 7th: Man, I’ll be honest with you ‘C.R.E.A.M.’ pretty much changed everything for me. RZA is my all-time favorite producer, period, no questions asked. When I heard C.R.E.A.M. come on the sample was so gritty, grimy, and dusty. These dudes are out here dropping bars in the midst of the grimiest grit. It caught me off guard to how dope they were lyrically. If you listen to the first album the production was so consistent. It sounded like they recorded it in a basement but it had that grit, grime, and soul to it. That’s what caught my attention, how nice they were lyrically. Chef was creative, Ghost was creative, Method Man was creative — they all were their own characters. They really got me hyped about Hip-Hop and RZA with the production, it was a wrap.

TRHH: That’s interesting. I’m a Hip-Hop fan from the cradle but there was a time when I stopped listening to Hip-Hop. When the Gangsta stuff took over I listened to Alternative music. When I heard Wu-Tang I was like, “Oh my God!” It reminded me of the stuff that I loved and grew up on like Rakim and Big Daddy Kane. Wu-Tang got me back into Hip-Hop. Do you have a favorite RZA production?

Maja 7th: [Laughs]. You know what man, I’ll be honest with you, probably my favorite joint from RZA is ‘Triumph’. It’s hard because he got some heat, but the beat on Triumph is ridiculous. If you actually listen to how that beat is put together with the strings in the background, the bass line how it just thumps all the way through the changes, that beat is incredible. That’s a beat that you can put up against anything.

TRHH: What beat-making equipment are you currently using?

Maja 7th: I’m dabbling into Ableton Live. I’m old school so a lot of my guys laugh and are in awe that I still use Sony ACID Music. That’s what I taught myself to make beats on so there is a version of that, that I still use – I chop samples in that. Ableton Live has become my favorite and I mix that in with Reason. I also use Fruity Loops as well with sequencing in terms of drums and whatnot. Hardware wise, I’ve never really been a hardware guy. My guy Slot-A and my dude Mike Schpitz are always telling me about getting hardware. I got a Korg padKONTROL that I’m messing with, trying to manipulate it and use it like an MPC machine. That’s pretty much it, just a MIDI controller for the keyboard, that’s it.

TRHH: Do you play any instruments?

Maja 7th: I do. When I was in high school I played two or three different instruments. I studied brass, I had a Jazz Studies minor when I was in college so I can play trumpet, french horn, and piano. Yeah, I can play instruments and read music as well.

TRHH: How do you incorporate that into sample based production?

Maja 7th: Well the sample is the foundation once you find it. Anybody that makes beats knows once you get it and the foundation is laid, even if the drum pattern is not what you’re going to finish with, it’s just the foundation. The fun part for me is the melody — the part for the hook, the part for the bridge, the part for the intro, any transition that you put it in, that’s what excites me. That’s the part where I have to use my ear and try to sync it up with whatever key the sample is in. Whenever you hear my production anything that you hear, whether its horns or synthesizers, that’s me that’s playing that. I also make beats that are sample free. There are 2-3 joints on Get Familiar that have an R&B feel. The goal is to expand and show people that I’m not just a sample based producer, I’m not just boom bap, I’m not just this, you can’t box me in.

TRHH: I recently saw Talib Kweli on his tour with Immortal Technique and he said the Midwest has the best producers. He mentioned guys he’d worked with — Kanye, J Dilla, and Hi-Tek. What is it about the Midwest that we bring the soul out in our sound?

Maja 7th: Honestly I think in the Midwest, whether it’s Indianapolis where I’m from or the Chi, a lot of our family members are from the South. I grew up listening to Al Green, B.B. King, and James Brown. My mom used to play those records and they were from the South, so Soul music came with it. I think a lot of people in the Midwest have someone in their family that has Southern roots. You can look at the food in the Chi, a lot of it is Southern-influenced. It’s also a melting pot. We’re in the middle of everything. People come to a huge city like Chicago and they might be from Memphis, Mississippi, or out West – you never know. We’re exposed to so many different people and so many different types of music, it’s just a melting pot by default. Whether it be through your family or people that you meet it’s just soulful. I think people in the Midwest are in the right area where people pass through and you get the chance to get put on to a lot of different types of music.

TRHH: What can we expect to hear on Get Familiar?

Maja 7th: I got my guy Neak from the Chi. I got Real Talk from Chicago as well. He did an incredible record called ‘Get Ready’. The dude is a genius lyrically, he’s insane. You’ll hear versatility like I was talking about earlier. There are going to be a couple of records that will surprise people because I have a joint with an incredible songwriter that I started working with in Indianapolis by the name of Bubby B. You’ll see when you hear the records that we did that it’s a complete R&B song. It’s not what you would expect from me. You’ll hear a lot of different things. I did some experimenting as far as R&B, I put more singers on hooks, and I’m also going to dig back in the crates and get 4 or 5 joints that I feel helped put me over the top and we’re going to mix those together. It’ll be a melting pot. It’s not going to be your traditional album that’s sequenced a certain way or has a cohesive sound. It’s going to be all over the place in terms of the production but you’ll be able to see the versatility and people that have followed me will be able to see some growth. That’s what you can expect, I’m really excited.

Sherron Shabazz is a freelance writer with an intense passion for Hip-Hop culture. Sherron is your quintessential Hip-Hop snob, seeking to advance the future of the culture while fondly remembering its past.
View all posts by Sherron Shabazz →
This entry was posted in interview and tagged Get Familiar, Indianapolis, interview, Maja 7th, producer. Bookmark the permalink.