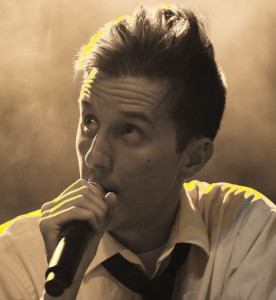 All this week on The Real Hip-Hop we’re highlighting acts that are currently performing on the 2014 Vans Warped tour. The Warped tour isn’t typically known as a platform for rap artists but this year’s tour features the Yo! Bring it Back stage, a stage that showcases the four elements of Hip-Hop – the emcee, the DJ, the b-boy, and the graffiti artist.

Pat Maine: I think it’s one of those things that every artist has to do. It’s like that stepping stone. Warped tour is legitimately one of the hardest fucking tours there is out there because of the places it goes in the country and the time of year it goes through them. It’s always the hottest time of the year and the hottest places. It’s a grind – it’s like 13 hour days no matter how you look at it. Realistically to me it means that I’m doing the right thing. I look at a lot of artists that I looked up to and early in their careers they did Warped tour. When I look at their interviews they always say the same thing too – it’s one of the hardest tours. I would just say it makes me feel like this is the beginning of something bigger at this point. We’ll see.

TRHH: Have the audiences been receptive to you so far?

Pat Maine: Yeah, it’s cool. With the Yo! Bring it Back stage we’re a ground level stage so we get to interact with the people a lot. I spend a lot of the day walking around with CD’s. I have 10,000 CD’s I brought out on this tour and I walk around and tell people about my set time to get them to come and hang out. I make ‘em laugh, give ‘em my Instagram, follow them, and they follow me back. I stay super interactive throughout the day and sometimes I get some of those kids that make it back to the stage and we all have a good time. I feel like for every handful of people that actually makes it to the stage it goes pretty well. I’ve been giving away like 300 CD’s each day. A lot of them people are donating money for – at least 50 of them. Freaking Cleveland did really well for me. I checked my Twitter today and had like 17 notifications from kids from Cleveland. I thought I did horrible in Cleveland to be honest with you. I thought it was an off day and I check out my feed and it’s lot of love from Cleveland. It’s been really cool. My social media has completely changed. I’ve had to figure out how to be interactive. It seems like these kids don’t really care about Facebook that much. They’re all on Instagram and Twitter and that’s where I’ve been at all on tour. My whole approach has changed since being out here.

TRHH: Talk about the importance of the Yo! Bring it Back stage being on a tour like this.

Pat Maine: I think it’s super important because Hip-Hop culture is important. There is not a whole lot of representation of Hip-Hop culture in mainstream society. Warped tour is a very mainstream thing at this point in time, however Kevin Lyman and their team do a good job of bringing bands on that they believe in. At the same time Hip-Hop is not represented at its fullest extent. We get to do that. We get to give kids that perspective and point of view. We get to unify with them in the moment with freestyles, cyphers, and get to have a good time. We have emcees, DJ’s, graffiti artists, break dancers, we get to expose them to all of that and they have a legitimately good time. It’s a whole new perspective for them. When you say you’re a Hip-Hop artist to these kids and the first thing that pops in their mind is chains and hoes — what’s glorified. We actually get to expose these kids to what Hip-Hop culture is. A lot of them don’t realize it’s actually a culture rather than rap music. They are only exposed to one piece. That’s why I think it’s important to have it out here.

TRHH: Are there any acts that you’ve seen on this tour that you weren’t familiar with and now you’re a fan of?

Pat Maine: Yeah. I’ve really grown to like Scout. He’s the only turntablist that’s out here. He’s also the engineer and writer for the band Issues. He’s out there cutting every day and he really shows us a lot of love because he comes from an underground Hip-Hop background as well. K. Flay, I wasn’t very familiar with her and what she was about until this tour. It was cool to watch her. I’m still trying to keep my eyes open.

TRHH: When I think “Salt Lake” I don’t think “Hip-Hop”. What’s the Hip-Hop scene like in Salt Lake?

Pat Maine: It’s awesome. There is a strong Hip-Hop scene in Salt Lake City right now. I didn’t grow up there. I actually grew up in an even smaller place that no one has ever heard of in Utah called Heber City. I moved there from San Diego when I was 9-years old, so I knew what Hip-Hop was going there. I listened to a lot of 2Pac when I was 8. I can imagine how funny that looked me being an 8-year old white kid listening to 2Pac in Heber City. That was what opened the door for understanding it. I moved to Salt Lake City because there was a Hip-Hop scene. It’s really cool and grassroots. If you take Minneapolis’ Hip-Hop scene and go back 10 years, that’s what Salt Lake is almost like. It’s very young. There is still a lot to do but there is so much love for it all. There are so many raw graffiti writers, a lot of dope emcees that are doing more battles on bigger battle channels. As far as touring artists actually making a name for themselves there’s not really a lot of that. A friend of mine named Task Rok has gotten a lot of Youtube love but nobody from there has really ever made it. It’s all very new, very fresh, and very raw. That’s what I appreciate about it for sure.

Pat Maine: It just depends on what period of my life you’re looking at. When I was super young I always wrote. I found poetry and realized what I was writing was poetry. Then I got older and realized that I liked Hip-Hop a lot. They eye opener was obviously Eminem when I was a kid. I listened to a lot of Busta Rhymes and obviously Wu-Tang. I also listened to a lot of Metal that had Rap in it when I was super young. What made me want to be more on my independent stuff was when I found Tech N9ne, Living Legends, Hieroglyphics, and all those super underground artists that were pushing that movement. That was when I found myself as an emcee. Before I felt like I was emulating and imitating and then I found what I connected with. That’s kind of the chain of events that led me here.

Pat Maine: It’s like a dark piece of art, that’s what that whole album is. Doomsday Charades is all about personal doomsdays that we all kind of go through and this is about picking your own doomsday. It’s a game of charades basically. Every song is related to some sort of struggle that I had to go through. It’s struggle music. Doomsday Charades is very fitting because each song has an in depth background to it. It took 5 years to make. It only took that long because I wasn’t forcing that album. I had made two or three albums in between the time of starting that album. Those are all the darker songs that ended up coming together and Doomsday Charades is what it came to be.

TRHH: What new music do you have coming up?

Pat Maine: I’ve started so many projects over the last couple of years since Doomsday Charades released. I’m trying to find the right producer. I think I’ve pinpointed a few of them. I started a live band project and a project with a couple producers. I made a couple of songs with them and it didn’t work out. I always end up more focused than everybody else is. They kind of have their own agendas as well. For whatever reason I’m sitting on a bunch of songs that I think I’m going to release as an EP, but they’re all so over the place from the different projects. The next album that I’m planning on making is with a guy by the name of Tsuruda out of Salt Lake City. His beats are sampled based but he also has that grimy bass sound that you hear in EDM. He really bridges the gap between that modern sound and that classic Hip-Hop sound. It’s like Madlib meets Skrillex. The beats get your head nodding but they have that aggressive tone that electronic music can create. I’m kind of going that way. I think we’re going to make a dope album together. I don’t know when that will be released – probably in the next year or so I imagine.

See Pat Maine on the Yo! Bring it Back Stage at the 2014 Vans Warped tour:

Sherron Shabazz is a freelance writer with an intense passion for Hip-Hop culture. Sherron is your quintessential Hip-Hop snob, seeking to advance the future of the culture while fondly remembering its past.
View all posts by Sherron Shabazz →
This entry was posted in interview and tagged Doomsday Charades, interview, Kinnetik, Pat Maine, Vans Warped Tour, Yo! Bring it Back. Bookmark the permalink.