Quadir Lateef: Half Earth, Half Angel 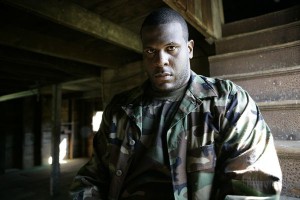 The religion of Islam has been intertwined with Hip-Hop since it’s boom in the mid-1980s. Acts like Rakim and the Wu-Tang Clan laced their rhymes with verbiage from the Nation of God’s and Earths. Public Enemy and Ice Cube were affiliated with Minister Louis Farrakhan’s Nation of Islam. Sunni Muslims like Mos Def and Lupe Fiasco begin their albums with praise and reverence to the creator of the universe.

Quadir Lateef is much the same. Formerly known as Q Boogie, the Buffalo, New York emcee has released a handful of projects showcasing his many styles. The one constant throughout each release is his devotion to his faith. Lateef’s new album Fool’s Gold is laden with food for thought and conscious rhymes reminiscent of Hip-Hop’s golden era with a 2013 energy.

Quadir Lateef recently spoke to The Real Hip-Hop about the importance of putting out a positive message, the role that Islam plays in his music, and his new album, Fool’s Gold.

Quadir Lateef: Fools Gold is another name for a material called Pyrite, it looks like gold but it’s not and it has low value. We live in a day and age where we value money, cars, drugs, sex and many other vices that are portrayed as valuable, but it’s not, it’s fool’s gold. My job is to let people know that this society values the worthless and ignores the real.

TRHH: How is Fool’s Gold different from your last release, Rebel Forces?

Quadir Lateef: Rebel Forces had more of the old school Hip-Hop elements like scratches and samples in-between every song. It was like a new school delivery with a old school feel. It was an album I did with a producer named Covert. We did the whole thing in like three sessions. We picked the beats and knocked it out the way. It’s really a combination of abstract raw Hip-Hop beats and it did pretty well.

Quadir Lateef: My wife Drea D’Nur connected with a French producer named Jean Detroit and one night she woke me up and said “Baby you gotta hear this,” so after I heard it I laid my verses down and the rest is history. ‘Freedom Scat’ is a message and a story about what happens in the inner-cities all across America.

TRHH: Why is it important for you to let your religion play such a large role in your music?

Quadir Lateef: It’s kind of natural. It’s not planned or plotted. It plays a large role in my life. Whatever you’re into is what you’re into. When Jeezy speaks he speaks about what he’s into. I speak about what I speak about and being a Muslim is something that saved me growing up in the hood. Being big and black, sometimes you don’t make it. Islam protected me and kept me in the right places. I don’t really try to force it on people. I just show them how it helped me. I try not to lose my listeners because I have Muslim and Christian listeners. I try to touch on righteousness and hopefully they can see and learn from it.

TRHH: What do you say to the scholars that say that music is haraam?

Quadir Lateef: A lot of scholars in the past went to the communities and made Islamic rulings on things of that area. Some things they did in certain areas were accepted but weren’t accepted in other areas. What’s the Fatwah in America? They don’t care about America. They don’t care about the Muslims in America. You cannot practice Islam the way an Arab practices Islam in Arabia. We have different vices of oppression that affect us. When we’re dealing with people who live off of music and whose inspiration comes from music, then you connect with the people by giving them a better alternative so they can hear something. Many of my friends who became Muslim listened to my music first. One of them studied and now he doesn’t listen to music—that’s his choice. He had my CD, I left and came back and our dialogue started off of music. Now he’s made Umrah, he has a Muslim wife, and Muslim kids. He was a nonbeliever two years ago. If a ruling was to be passed in America I’m sure this would be an OK method of Dawah.

TRHH: Your Half Earth, Half Angel album had no musical instruments on it. What made you decide to go that route with the project?

TRHH: What exactly is ‘The Quickening Arts‘?

Quadir Lateef: ‘The Quickening Arts’ is another word for music. They call music the quickening art. There was a special on TV about a guy in an old folks home and he wouldn’t respond to anyone, but when they put music on he became very responsive and started singing the old songs. So they say music is a quickening art and when you hear the quickening art most people respond to it.

TRHH: What’s your goal in the music industry?

Quadir Lateef: My goal is to spread a message of peace and righteousness, if people want to come to Islam that’s a plus. It’s my job to educate them on what I believe. Also to show people that being tough and rough is not selling dope, it’s not killing people, it’s actually going to work, going to school, raising a family, and spending time with your kids. In reality that’s the hard part. Standing on the block, getting a gun and shooting somebody is easy. Going to jail is easy. The hard stuff is the real stuff that takes responsibility and patience. It takes a sacrifice that many men aren’t willing to do. That’s the message I really want to get to the people.

TRHH: I saw the video you made talking about Chief Keef and artists like him. What’s your opinion on artists like Keef whose messages are 99% negative?

Quadir Lateef: Hip-Hop is being used as a device of oppression. Malcolm spoke about devices of oppression. Today’s mainstream Rap is a device used to oppress. A device used to build a corporation, fuel the prison industry, and to keep black men dead and down in the streets. It’s very sad because the people are so engulfed in it. All I can do is do what I can to try to speak to these dudes to let them know that there is an alternative. I just want to create an alternative. If one person listens, cool. I can’t save the world and I know that’s a reality.

TRHH: Who are some of your inspirations? In listening to you I detect Biggie and a couple of other people. Have you heard that before?

Quadir Lateef: I’m working on Rebel Forces 2. That will be released in the winter probably. I’m working on another project called Slave Age. I got my hands full. I’m trying to put together a tour of the UK. I got some stuff on deck with Ali Shaheed Muhammad. I’m just really trying to be productive.

Sherron Shabazz is a freelance writer with an intense passion for Hip-Hop culture. Sherron is your quintessential Hip-Hop snob, seeking to advance the future of the culture while fondly remembering its past.
View all posts by Sherron Shabazz →
This entry was posted in interview and tagged Fool’s Gold, Freedom Scat, Half Earth Half Angel, interview, Quadir Lateef, Rebel Forces, The Quickening Arts. Bookmark the permalink.