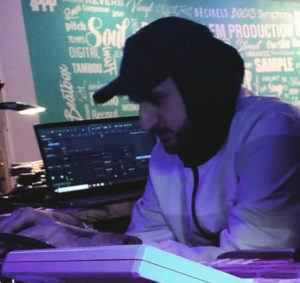 The Real Hip-Hop spoke to Kheyzine about his start in beat-making, working with Boob Bronx, and his new album, Young, Drugged, Armed & Dangerous.

Kheyzine: I had the idea of this concept in August 2019. Most of the compilations I worked on refer to movies. I wanted to start with a really original concept and I was looking for a title that summarizes and at best makes the parallel between Hip-Hop and street hardness. With this title I was right in the theme.

TRHH: How long did it take you to create the album?

Kheyzine: From the moment the idea was precise in my mind, I started recruiting artists who would be perfect for this concept from September 2019. While moving forward in the creative process, I was able to complete the recruitment and project in December 2019. I really listen to underground artists and all the days I discover new talents, the goal is to put them in the light and bring a clean and correct alchemy and bring a quality work, always with the passion of Hip-Hop.

TRHH: How did you get into production?

Kheyzine: By buying records since my adolescence I have always been attracted by the composer of the beats of each song. I hastened to open the CD and read the credits inside. In 2012, I discovered Fruity Loops 10 and I learned to use it in a year. I’m self-taught and even today I learn new things about it. Learning is lifelong. Actually, since 2009 and MySpace I was in contact with quite a few French artists which allowed me to have some connections at the time I started beat-making.

TRHH: Do you still use Fruity Loops? What does your workstation consist of?

Kheyzine: Yes, I still use Fruity Loops 10 and I have a master keyboard, suite and break search that I use to find samples or different drum kits. For all that the mixing and mastering for my projects I work with Dan.Akill. I met him more than a year ago and the work is going well. I also took care of recruitment for his project “Da Soulvivorz’s” that came out in October 2019.

TRHH: How would you describe the Kheyzine style of production?

Kheyzine: The color is mainly dark and melodic. Sometimes grimy despite the hints of flashes of light making their appearances. In general, this is what my beats have retained.

TRHH: How did you link up with Boob Bronx to do “Water”?

Kheyzine: I had loved his previous project “Kings Run Doli.” I had congratulated him and he had sent me a CD version of it. I did the “Tony” project with Mr. Yellow Balaclava, based on Scarface and in this case, Tony Montana. He took care of the concept and recruitment and wanted to follow up on a second collaboration, Stansfield. He contacted me on Instagram because he was looking for beats. He is a designer and painter, so, he launched the concept, and I did the beats and I took care of the complete recruitment of artists. From there I started to contact Boob Bronx. He appears on the song “Murder Concerto” with the French emcee, Bonkar Jones. At that time we really connected. I sent him a lot of beats and he started working on Water and in return he did me the honor of appearing on my project, “Young, Drugged, Armed & Dangerous” and my next album, Robert McCall. He also appeared on the compilation of Dan.Akill, “Da Soulvivorz’s.”

Kheyzine: Sincerely, they are all incredible. I took a real pleasure to build this project. The choice is tough because they each have their own atmosphere and many times I pressed the replay button. If I had to choose a track, that would be “Victim.” The atmosphere is crazy and he really spit fire on it. For me every song is a banger, and it is my goal to create while others take great pleasure in it.

Kheyzine: The ultimate dream would have been Prodigy, peace to his soul. Every collaboration with artists is a culmination and an honor for me. Collaborations are done with the respect and appreciation of our respective works. My top 5 is Pro Dillinger, Eto, Westside Gunn, Snotty, and Conway.

TRHH: Who is the “Young, Drugged, Armed & Dangerous” album made for?

Kheyzine: “Young, Drugged, Armed & Dangerous” is designed for experienced listeners who enjoy street rap and boom bap. The artists present on the album are making a lot of noise now, and also for years to come, it is certain. I think that the listeners will find themselves enjoying this project and the sinister atmosphere. It’s musical, creepy, and it speaks for itself. The beats bring out emotions that are quite broad. Overall, it is very dark and obscure, neo-boom bap.

Sherron Shabazz is a freelance writer with an intense passion for Hip-Hop culture. Sherron is your quintessential Hip-Hop snob, seeking to advance the future of the culture while fondly remembering its past.
View all posts by Sherron Shabazz →
This entry was posted in interview and tagged Boob Bronx, Bordeaux, France, interview, Kheyzine, producer, Victim, Water, Young Drugged Armed & Dangerous. Bookmark the permalink.