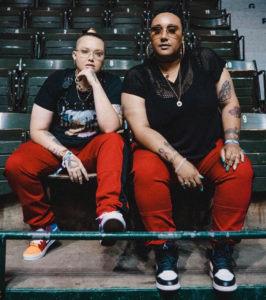 Blimes and Gifted Gab are B.A.G. From San Francisco and Seattle, respectively, the solo emcees went viral in 2018 for their collaborative song “Come Correct.” The duos silky smooth voices, laid back flows and punch-line laden lyrics made them two of the top artists in Hip-Hop to keep an eye on.

The Real Hip-Hop spoke to B.A.G. after their performance at the 2019 Soundest Festival. Gab and Blimes spoke about the importance of performing at Soundset, their respective 2019 solo releases, and the upcoming B.A.G. album.

TRHH: What does it mean to you to perform at Soundset?

Blimes: It means a lot, man. This is the biggest Hip-Hop festival in the nation in my eyes, now that Rock the Bells isn’t happening anymore. This is so big for us. I’m really honored to be here.

Gifted Gab: Same. I always just wanted to go to Soundset ‘cause all the acts were way more appealing to me than most other national festivals. The fact that the first time I’m seeing Soundset I’m performing, I’m very honored to be here.

TRHH: How do you feel your set went? This is my first time seeing y’all. I was loving the energy.

Blimes: Thank you, man. It was good. It was really good. We rocked early and people were here early. That was really tight to see people come out for the earlier acts. The energy was great. I think it was a lot of people’s first time seeing us. It felt really good to connect with people. The socials went up. It was nice to see people’s presence both physically and digitally. To see that translate was really beautiful because that means people were rocking with it.

TRHH: Explain the banana thing you did on stage for me.

Blimes: That song is called Nasty. We filmed a music video where we did a bunch of shit that was nasty. That was one of the things. We like to be quirky and give them something to remember. I was like, “This is wild, but I’m going to do it.” I saw the bananas back stage and tied it into the music video. Maybe they’ll go home and watch the music video and be like, “That’s why she did that! That weirdo!”

TRHH: Is there anyone that you’re excited to see perform just as a fan?

Gifted Gab: DMX. I was hype. That was my highlight.

Blimes: I wanted to see Run the Jewels. Maybe we’re going to try to get to them. I love DaBaby. He’s rocking right now and we’re listening to him in the background. I’m very happy that they brought him in in Uzi Vert’s absence. What else? Atmosphere. There’s a million but I can think of them right now. It was dope to see Sa-Roc. I really wanted to see Tierra Whack, but we’ll catch her another time. All the ladies representing today. There is really strong female presence and it feels really good.

TRHH: How big was Come Correct for you guys? When I first saw it on social media I was like, “Who the fuck is this?” That shit was crazy.

Gifted Gab: I think that was the feeling across the board.

Blimes: Yeah, man. We literally just put it together off passion. We didn’t have any aim or any album for it. We were just vibing in the studio, freestyling with each other. We didn’t have any goal other than two rappers getting together and actually just hanging out and havin a good time. That’s what came of it. With the video and stuff, we really just threw that together with one of Gab’s friends, Andrew. The world received it in a way we never expected to. We didn’t realize what we represented to people. We were just friends rapping. To see what it was catalyst for in terms of people falling in love with what we do separately and together was so cool, man. It made us be like, “Okay, people still respect bars and spitters.”

TRHH: Hot Damn is another crazy record from Castles, how did the collab with Method Man come about? ‘Cause he don’t jump on everybody’s shit.

Blimes: He saw my battle raps and he reached out via this television show called “Drop the Mic” that he’s working in with celebrity battle rapping. He reached out via the producers of that show and when I met him on the set of that show they asked me to come down and work on the show to be a battle rap coach. I met Meth the first day on set and he was like, “I fuckin’ love you! I love what you do!” He was singing my song to me and I was like, “What?! This is crazy!” He said, “Let me know if you ever want a feature,” and the next day I went in the studio and sent him two [laughs]. He’s like a big brother and a mentor to me. We have a little remix of it on the B.A.G. project coming out. Gabby hopped on it as well.

TRHH: Explain the titles of your albums, Cause & Effect and Castles.

Gifted Gab: For me Cause & Effect is how I live my life. I wouldn’t call it a religion, but I’m a universe type of person. Things happen when they happen. I don’t force nothing. The cause of something is the effect of another. The way the album came about is I don’t really make projects in the mind to actually make a project. I just kind of make the songs and go as they go. Each song just had a significance on a certain part of my life that had a cause that effected the next one. It gets pretty deep. I’m a visual artist, too, so I painted the album cover and got it digitized. It’s a really personal project for me. There are no features. All of the production is from my good friend, Antwon Vinson in Seattle. He’s an amazing producer with a band behind him. The homie Medearis Dixon on the sax, Max Watters on the guitar, and Andrew Imanaka on the bass. It’s just really a very personal album and it’s just me and my producer. It’s the essence of it.

TRHH: It makes it more cohesive.

Blimes: Castles, we’ve been building up this thing for a long time, brick by brick, piece by piece. Sometimes I want to put a fortress around me and block it all. I remember that we gotta let people in. It’s really about what we’ve built and the time that it’s taken to build it. The brick by brick methodology of building what we’ve built from the ground up. This whole lane that I’ve built for myself is my castle. I’m going to kick it in there and chill here.

TRHH: When will we hear the B.A.G. album?

Blimes: At the end of this summer.

Sherron Shabazz is a freelance writer with an intense passion for Hip-Hop culture. Sherron is your quintessential Hip-Hop snob, seeking to advance the future of the culture while fondly remembering its past.
View all posts by Sherron Shabazz →
This entry was posted in interview and tagged B.A.G., Blimes, Blimes and Gifted Gab, Blimes Brixton, Castles, Cause & Effect, Come Correct, Gifted Gab, Hot Damn, Nasty, Peach House records, Soundest Festival, Soundset. Bookmark the permalink.