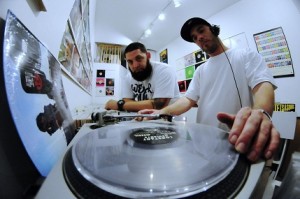 Rapper M.I. and DJ/producer D.J. Cutt make up the group Constant Deviants. After years of failed indie and major record deals the duo started their own record label, SIX2SIX Records in 2009. The result is a full-length album titled Diamond.

M.I. of Constant Deviants spoke to The Real Hip-Hop.com about the group’s SIX2SIX record label, the most valuable lesson they’ve learned in their recording career, and their new album Diamond.

M.I.: There are two different reasons for the Diamond title. Diamond represents ten million sold. It has been ten years since me and Cutt had done music together as Constant Deviants. That was the initial reason and ultimately it just grew. The diamond is more representative of the preciousness and rarity of the stone. It’s the hardest natural substance.  It’s a precious stone that’s not as pretty as it is once it’s cleaned up. So it kind of represents the type of music we do and it’s a lost art to make good Hip-Hop and not sound like music from the 90’s but still have that feel to it.

TRHH: Why was there such a big gap between the times you two recorded together?

M.I.: In 2000 I got a deal with Arista Records with Mark Pitts. Mark had me working with other producers. Me and Cutt were still working together but not as Constant Deviants. Toward the late 90’s the group thing kind of phased out and if you were trying to get a deal it was more like an artist. Me and Cutt always worked together but we didn’t go with the Constant Deviants thing. As we started getting more and more into working with other producers in the industry it just kind of started becoming more like we were trying to make music for a major to put it out. We were getting singles together and it just didn’t work out. It kind of tainted what me and him did initially because we were always making music together. When there was a third party like a Dante Ross or a Chad Elliott it was adding a weird energy to what we were doing. It threw him off production wise and threw me off, we just didn’t work together that well. What it did was it gave us a chance to separate and work with other people and grow a little bit. We kind hindered each other’s growth with his insecurities, my insecurities, and our inhibitions with music. It brought another element out of me and vice versa for him.

TRHH: Tell me about the new single ‘Gangster Boogie’.

M.I.: ‘Gangster Boogie’ was actually one of the last songs we did for the album. It was a track he sent after we had already put the album together. When I heard it the sample was reminiscent. I liked how he flipped it so I did something on it and always wanted to use that Snoop hook. I put that Eazy-E line in there and he thought to put the Gangster Boogie sample on there and it just came together perfectly. The album is hard to talk about because it took us two years to put the album together. We work separately from each other. We’d be in the studio together but he’s in Jersey and I’m in Baltimore. He would send me the track via e-mail. I got a little studio in the crib where I’d work on it and send it back to him. Then we’d get together and work on the hook afterwards and mix ‘em. I felt like we needed something a little more modern sounding that people would get with. A lot of the other stuff on the album is touching a certain audience so I wanted to come up with a record that the audience might broaden a little bit on.

TRHH: The joint ‘Top 10’ is dope. How’d you come up with the concept for that song? Did anyone miss the cut?

M.I.: Good looking. Essentially it had the “I remember” sample in there and I didn’t want to do eight bars of remembering this or that. I was trying to think how could I put something in there that would remind you of a certain era without talking about it. I didn’t want the song to be about remembering ’93 or something like that. I wanted to touch that era without talking about remembering it. The first line was the Kool G Rap one and I thought it would be dope if every eight bars I started off with another rappers rhyme from back in the day and just rap off of it. I named it ‘Top 10’ even though it wasn’t ten that made it, it was just dope. Top ten is like Adidas. It’s so many things that don’t even come together but those are some of my favorite rappers that I used. Nobody didn’t make the cut it was just the ones that kind of fit. Most of those people are on peoples top ten list. If you asked most of the people from the 80’s and the 90’s who their favorite rappers of all-time were they’d all be on there–Big Daddy Kane, Kool G Rap, Rakim, KRS-One, Slick Rick, and LL Cool J. We didn’t want to put a word hook so we did something that was reminiscent of that era with just scratching the sound in the hook.

TRHH: You guys have been recording together for a long time, what’s the most valuable lesson you’ve learned in the music business?

M.I.: Stick with what you do. Don’t ever let people tell you what is in and what you should be doing. That’s where we messed up. When we started listening to outside energy and switching it up it messed with our chemistry. If you’re an artist you have to stick with what you do. You can’t be doing what’s going on at the time. It works for people that are more like entertainers but I’m more of a writer. This stuff means something to me. Music has saved my life. To me it has to be from the heart. Our biggest mistake that I feel like I’ve made is when we did get deals we tried to make records that they’d play on the radio. At the end of the day if it’s going to happen it’s going to happen there’s still an audience out there.

M.I.: The ultimate goal is to try to be the rebirth of what happened in the 80’s with Def Jam. We feel like there’s an open vein for good Hip-Hop right now. We do actual physical product like CD’s, cassettes, and vinyl. We also release archived music of ourselves and other peoples archived music that the collector’s chase on limited vinyl. We want to be one of the bigger boutique record labels in the world. We do limited everything, like clothing, but we want to remain boutique. We don’t want to become a major label. We want to me small, independent, and have everything have limited runs.

TRHH: What’s next up for Constant Deviants?

M.I.: The next step is to try to get on tour, ultimately overseas because that’s where our biggest audience is but definitely in the states as well. We want to try to put together a decent tour and get out there and start seeing and touching the people. We want to let ‘em know we’re still fresh with it. That’s why we didn’t want to come off as dudes that are washed up. We were real young when we came into it. We learned on our own. We never had management; we just rolled with people and believed the people we rolled with. We learned a lot ourselves and we restarted it and said let’s put an album together. When that started growing it was like, now we need to get out there and really touch the people.

Sherron Shabazz is a freelance writer with an intense passion for Hip-Hop culture. Sherron is your quintessential Hip-Hop snob, seeking to advance the future of the culture while fondly remembering its past.
View all posts by Sherron Shabazz →
This entry was posted in interview and tagged Constant Deviants, D.J. Cutt, Diamond, interview, M.I., SIX2SIX Records. Bookmark the permalink.