Mr. Green: Live From The Streets 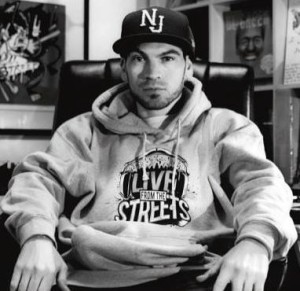 Producer Mr. Green has had a hell of a 2015 so far. He released a stellar joint album with former member of The Roots, Malik B, titled “Unpredictable” and followed that up with the release of his very own solo album, “Live From the Streets”.

Live From the Streets is a collection of music that originated from Green’s web series of the same name. Mr. Green travels the world sampling street musicians and re-working their art into something unequivocally Hip-Hop.

The Real Hip-Hop recently spoke to Mr. Green about working with Malik B, his unique production techniques, and his new album, Live From the Streets.

TRHH: How did the Live From the Streets idea originally come about?

Mr. Green: It was me and my boy Sam [Lipman-Stern], he’s a filmmaker and graffiti writer. We wanted to do a project together of some kind. He showed me this crazy mic that he had and played me some music he had recorded from a street musician. I was like, “Oh, that’s bangin!” It sounded so good that I had to sample it. From there we just kind of turned it into a show. It’s a half-documentary, half-music tutorial show. Boom [laughs]!

TRHH: How long did it take you to put this album together?

Mr. Green: It took a couple years just because we started out on our own on my Youtube channel, greenhiphop. Then we started working with VICE/Noisey about a year in. We were going to put the album out under their label but they just wanted to do it as a free mixtape. I wanted to put it out as a physical thing – something that people could hold in their hand and buy. So we ended up doing it on our own. The album took a little while. We mainly focus on the show. The main goal is to get the show going and the album just kind of came with the show.

TRHH: What’s the most unique situation that you got a sample from?

Mr. Green: Ah man they’re all so unique, it’s really tough. One of my favorites was Country in Camden, New Jersey. He lives in a tent. He had been singing for 20 years but he never actually had a chance to sing on a track. When we met him and started recording he was like, “I can’t wait to hear myself on a song because I always wanted to and I never got to do this.” I took his voice and turned into a real song. When I played it for him he started crying. That was probably one of the best moments. It’s hard to say what the most unique moment was because we have so much crazy stuff on that album.

TRHH: In your Youtube videos I noticed you use Maschine. How long have you been using it and why is it your workstation of choice?

Mr. Green: Oh yeah, I love Maschine. I started using it right about when we started doing the Live From the Streets show. I like it because it’s a mix of hands-on physical equipment with mouse clicking production, which is actually how I started. I started as a DJ and then a couple years later I started making beats on Fruity Loops. That was my thing for a while but I wanted to get out of that mouse clicking style of beat-making because it was getting a little boring. So I tried Maschine and it’s the best of both worlds. If you’re a hardware person and you like touching things with your hands, not just computers, then it’s good. It’s also good for people that just like computers. It’s a hybrid type of thing. I like Maschine and I actually just started working with them. They brought me to their studio a couple of times and we’re trying to figure out what type of project we can do together. Shout out to Native Instruments/Maschine – good people over there.

TRHH: You also released an album earlier this year with Malik B called ‘Unpredictable’. He’s somewhat of a recluse, how’d you hook up with Malik to record this album?

Mr. Green: I was doing my Live From the Streets show at the time. I went to the Roots Picnic with a beat machine, a speaker, a microphone, and a keyboard. I was just going to set up outside in the line and perform for the Roots fans as they went in. Five or ten minutes after I started playing beats Malik came up kind of crazy and excited like, “Yo, you made that beat?!?! I wanna rap! Gimme the mic!” I was taken aback, he was real aggressive. He asked, “Why aren’t you guys inside?” and he gave me and my boys backstage passes. From there we recorded an album off of having met outside in the street, which is pretty cool. It happened organically. It wasn’t an e-mail, a meeting, no agency, or manager – not even a friend. We literally bumped into each other and just started rockin’.

TRHH: The song ‘We Gonna Make It’ has an upbeat feel to it. How’d that song come together?

Mr. Green: Ah man, that’s an excellent story. I wouldn’t speak about this if Malik wasn’t cool with it, but he got locked up for 2 months. When he got out he was staying in a transitional house, kind of like a halfway house, run by this good dude named Nate Green. He’s not related to me or anything, he just happens to be a good dude with the same last name as me. Nate Green let me and Malik record at the halfway house that he owned. I brought the little studio setup and we started recording. Nate popped in, heard what we were doing and he started humming. I was like, “Yo, that sounds good, we gotta use that.” Malik and I came up with the lyrics and had Nate sing it. It was just some weird chance encounter by his mentor/owner of his halfway house who I like a lot. I like Nate Green, he does a lot for the Philly community. He’s been through the struggle himself and he got out of it. Now it’s his goal to help other people get out of it. I got a lot of respect for that dude. It was cool to get him on the album.

TRHH: That’s dope, man. The one thing I like the most about your beats is the drums…

TRHH: Yeah, man. I love your drums. Is it giving away a secret if I ask you how you get your drums?

Mr. Green: Thank you. Nah, man I’ll say it. I get drums from absolutely anywhere. I may have someone play it for me, I may hear it in an old record and chop it up in a production kit, or I might record it myself. I’m always on the lookout for good drums. I don’t say, “Oh I don’t get drums from the internet. I don’t get drums from records,” I do everything. I get drums from wherever drums can be gotten. I like to sample from everything. Everything is fair game for me. I don’t want to give up specific sources. I might actually put out my own drum pack. Like a “Mr. Green’s Drums” in the future. I know some producers have been doing that. We’ll see, that might happen and if it goes down I’ll send you a copy.

TRHH: Dope! That would be amazing! If you could pick one artist that you’d like to produce for who would it be?

Mr. Green: I always aim extremely big these days because I want to work with the biggest rappers. The one dude who is like extremely big right now but also very Hip-Hop and I feel like he would work well over my beats would be Jay Electronica. He’s a straight lyricist. You can tell he has rhyme books, studies rap, and is a real Hip-Hop dude. He’s also down with Jay-Z and signed to Roc Nation so he has the best of both worlds. He’s in the mainstream that a lot of people want to be a part of but he’s not really doing shit that the core level of Hip-Hop can’t listen to. I respect that dude. I’d like to work with Jay Electronica. He follows me on Twitter and I just DM’d him the other day. I haven’t’ heard back yet, so if anyone sees this Tweet to Jay Electronica and tell him to rock on my beats and do a Live From the Streets episode [laughs]. Shit like that is actually possible. If he got like 12 tweets in one day he might be like, “Let me check out Mr. Green.”

TRHH: He might. I’ve DM’d him too and he’s never responded to me [laughs].

Mr. Green: I don’t blame him though. He has a half million followers, he can’t answer every one of us. We actually have a mutual friend, Hex Murda, and he tried to connect us too at one point. Hex was tweeting both of us at the same time like, “Yo Jay, I hate you. I hate you just like I hate Mr. Green.” That’s a big compliment coming from him. If he says he hates you that means he likes you. Shout out to Hex Murda, he tried to hook that shit up.

TRHH: What can we expect in the future from Mr. Green?

Mr. Green: I got a new album that’s just about done. I’m going to be announcing it in the next few days. We got some shit popping up on MTV Jams to announce it also. It’s kind of a surprise. I don’t want to say exactly what it is. It’s not exactly a Hip-Hop album. It’s slightly different but still very, very bangin’. It’ll be a bit of a surprise but I don’t think anyone will be disappointed. They’re gonna be like, “Yo, I didn’t know I was looking for that, but that’s what I was looking for.”

Sherron Shabazz is a freelance writer with an intense passion for Hip-Hop culture. Sherron is your quintessential Hip-Hop snob, seeking to advance the future of the culture while fondly remembering its past.
View all posts by Sherron Shabazz →
This entry was posted in interview and tagged interview, Live From The Streets, Malik B, Mr. Green, New Jersey, producer, Unpredictable, We Gonna Make It. Bookmark the permalink.