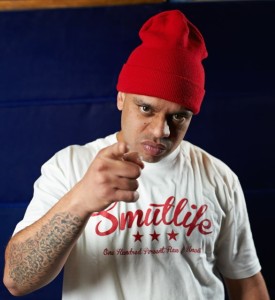 The Real Hip-Hop spoke to Nutso about joining forces with Divided Souls Ent., the #NoLabelJustUS record label, and his new EP, Divided Soul.

Nutso: Let me tell you man, I had to differentiate the good and the evil – the evil and the evilness. I had to switch it up. You already know, man. The devil and the angel. If you look at all the artwork for this release, it’s based on the Da Vinci Code type of hidden coding and the fight between science and religion so I twisted it and made it my fight with my good side and bad side. We all have it inside us and plus it’s a play off the producers name so it all came together pretty nicely.​

TRHH: How’d you link up with Divided Souls Entertainment?

Nutso: What happened was​ we linked up via the internet and Spank and my partner Mills have been working together for some time now via music distribution and the idea came up to do an EP with them as we’ve been releasing EP’s consistently with one producer for some time, and their beats are dope as hell so we all got together and agreed and voila, it’s finally here. Divided Souls Ent. & DJ Pain 1 are known for their work with many artists such as Scarface, Ludacris, G-Unit, Rick Ross, and so many more. It’s an honor to be a part of that group of names.

TRHH: The EP has a classic East Coast sound but the single ‘Block Boy’ has a down south vibe. How’d that song come together?

Nutso: Oh yeah! This what happened, man, I came out and did 4-to-6 projects over the last 2-3 years. I collaborated with producers from overseas and from the East Coast. I did a mixtape with Nik Bean and DJ Skee from the West Coast titled ‘Western Union‘ that later became an EP. It featured Game, E-40, Kurupt, Glasses Malone, and Psycho Realm from Cypress Hill. We switched it up and brought it to the West. We been doing the boom bap and keeping that East Coast shit hard but we hollered at producers like, “Who else got beats in the stash?” We switched it up. Divided Souls Ent. & DJ Pain 1 are producers from the South and it wasn’t about doing the trap beats and all of that. They hit me with like 20 beats and it was only a chosen few I picked. When I did Block Boy I got family down south saying, “Yo Nut, we love to hear you on that trap shit even though you do that boom bap hardcore shit.” I just had to switch it up on them fools for the non-believers, but I gotta get creative when it comes to me. I do good music — never stay in a box. We are here to have fun doing music and be creative so that isn’t a trap beat or down south song, it’s a Hip-Hop record! ​

TRHH: What differentiates a Queens emcee from an emcee from Brooklyn, Staten Island, or the Bronx?

Nutso: Aw, man. I’m a Texas fan as it is from UGK to all the above, rest in peace Pimp C. Once I heard Trae I was like, “That’s that shit from the South when Outkast, T.I. and Jeezy and them was coming out!” Once I heard Trae, he’s an up and coming artist like me – he’s signed but I’m unsigned – it was a perfect collaboration.

Nutso: It actually is, man. It’s an independent company consisting of Ron Mills, Mike Duse, myself, and producer Domingo. Domingo fucked with Pun, the greatest, G Rap, you name it. That’s the team. We’re trying to broadcast that live. That hash tag is major right now.

TRHH: What’s next up for Nutso?

Nutso: We got the EP available worldwide. It’s everywhere digitally. We got the physical copies on fatbeats.com, amazon.com, and undergroundhphop.com. The Block Boy video is out and the next thing we’re working on is deciding the next single. This is an exclusive, I’m working on an album with our partner and producer Domingo titled #REDSunday. After Divided Soul coming off the spring going into the summer we gon’ come out with another one. It’s going to be an all-Queens album. I already got verses from Prodigy, Cormega, Kool G Rap, and Royal Flush. That’s in the mix right now. We just wanna let heads know we on it. Go to my music shop nutsoppm.bandcamp.com and stay in tune on nutsoppm.com, and the rest is history, man. We have a long discography available online and a few mixtapes as well on soundcloud.com/nutsoppm so subscribe and walk with the team, #NoLabelJustUs.

Sherron Shabazz is a freelance writer with an intense passion for Hip-Hop culture. Sherron is your quintessential Hip-Hop snob, seeking to advance the future of the culture while fondly remembering its past.
View all posts by Sherron Shabazz →
This entry was posted in interview and tagged #NoLabelJustUS, Block Boy, Divided Soul, Divided Souls Entertainment, EP, Hustler’s Spirit, interview, Nutso. Bookmark the permalink.