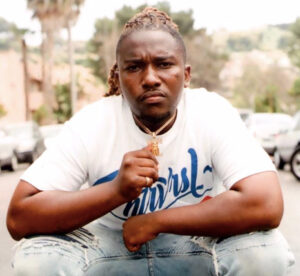 Osbe Chill has returned with a new album that joins the west coast with the east coast, yet appeals to every state in between. South Central, Los Angeles emcee Chill shared his life stories over the sounds of North Carolina producer GiveEmSoul, on a project called “Soul Rap.”

Osbe Chill spoke to The Real Hip-Hop about the incident that led him to take rapping seriously, how a major record label tried to direct the content of his music, and his new album, Soul Rap.

TRHH: How did you link up with GiveEmSoul to decide to do the Soul Rap LP?

Osbe Chill: I linked up with him through, I like to call him an A&R, DoughNetworkz. He told me about Soul, I checked out his music, and I was fucking with the beats, so, we worked from there.

TRHH: On the song “Spark” you detail your journey. What was the specific spark to make you move from hustling to rapping?

Osbe Chill: [Laugh] The spark was the county jail. I literally was in jail for my eighth time and I was fed up having to go through that. I told myself in my cell that when I got out I was going to take rap serious. I always rapped, but I never took it serious or put a project out or anything. So, when I got out I started tearing up cyphers and rap battles ‘til I created my own project.

TRHH: On the song “Got On” you talk about never forgetting where you come from. How challenging is it to move forward with life, but still keep ties to your old neighborhood?

Osbe Chill: It’s not that challenging, honestly. I could say the only challenges would be people feeling like I changed or something on them. Or old friends not seeing me as much and seeing me doing things with legends. That would be the only challenging thing for me. That’s not the case in my mind. I felt like it would be more inspiration for them to see that it’s possible for us to do something different, rather than what we thought we could only do, like sell drugs, gang bang, and things of that sort.

TRHH: So, you get more love than hate at home?

Osbe Chill: I lowkey get more love from outsiders than I do in Los Angeles.

Osbe Chill: I’m not sure, bro. I think it’s just like a culture out here, bro. They don’t like to see people come up that they once knew. Or they felt like you weren’t deserving enough like, “I’ve been through more than him” or “Why not me?” I think it’s a mental thing that people have got to evaluate with themselves.

TRHH: Your style seems like a blend of different flavors, who are some your influences in Hip-Hop?

Osbe Chill: My dad, for one. He was the first to buy my studio for me. He always rapped. My dad is really my first influence from him rapping and the things he listened to like Guru, Public Enemy and stuff like that. I would say those are my first influences and by the time I was in high school I was heavy into Lil’ Wayne, Nas, 50 Cent, and The Game.

TRHH: The Game is like the only west coast guy you mentioned. That’s interesting.

Osbe Chill: I was more into New York Hip-Hop because they kept it more lyrical. I mean, I listened to N.W.A., but that was before my time. By the time I hit high school N.W.A. beats weren’t really that hard to me as they were back in the days. Know what I mean?

TRHH: Nah, man [laughs]. That was Dr. Dre! Those beats are still hard!

Osbe Chill: They’re definitely hard, but once I got to high school you’ve got Cool & Dre and all of these different producers that are using sounds that I never heard before. That inspired me because that was out at the time. I’m not saying that Dr. Dre’s beats were trash back then, I was just saying in the time. I’m pretty sure in the time of N.W.A. people were inspired because they never heard anything like it. For me Cool & Dre were the big-time producers at that time. Even Dr. Dre – I still fuck with shit off of The Chronic and all of that. I just wasn’t a big west coast Hip-Hop fan. I loved New York type beats.

TRHH: Speaking of Dre, you’ve gotten love from Game and Dre, how important was it for your career to get props from west coast giants?

Osbe Chill: Ah man, I wasn’t even worried about my career. I was just honored to be in their presence. I never imagined even ever doing anything like that – going on tour with Game, and being in the studio with Dr. Dre. I never looked at it career-wise. It was more of being there like, I finally made it. As far as my career, it helped it a whole lot because people respect these guys. For them to pay attention to me and shed light on me, it was amazing. It was very important.

TRHH: Did you get any advice from those guys?

Osbe Chill: Plenty of advice. Plenty. “Don’t stop” was the main one.

TRHH: On the song “In the House” you say “Hip-Hop used to make me feel good, now I feel some type of way.”

TRHH: Yeah. Explain what you mean by that line.

Osbe Chill: Well, like I said, I was into Nas, Wayne, Game, 50 Cent – lyricists. These are the people I listened to that made me go home and try to get my bars up. Now, it’s like bars don’t even matter anymore. You’ve got the Lil Pump’s, the Lil Xan’s – shout out to Lil Xan – he let me open for him one time. It’s not the same. So, when I said “I feel some type of way” it was the fact that Hip-Hop don’t respect the lyricists no more. Even though now we’ve got people like Benny the Butcher, it’s still overlooked in my book.

TRHH: I agree with you. Why do you think it’s overlooked?

Osbe Chill: I feel like it’s an agenda. I was signed to Interscope and I remember them saying, “You should make songs about sex, money, and drugs.” I talk about that stuff because I lived it, but at the same time I like to put a message out there with my music as well. I feel like it’s an agenda. They’d rather push ignorance because it’s easier to control, rather than honesty and truth.

TRHH: You said a lot there. Do you wanna air out the person who told you that at Interscope?

Osbe Chill: Nah, man. I’m not going to do that. They might try to blackball me out the game.

Osbe Chill: It was a real-life experience. I’ve always heard them tell people stuff like that, but I was actually able to experience that and it made me feel sick to my stomach. I feel like music is supposed to be freedom of speech and you’re supposed to express how you feel, regardless. It’s always a crowd for everything. It’s always people who are going to listen to me and listen to Lil Pump. Just the fact that they’re trying to guide my mission to be something else, I was over it. I wasn’t into the deal no more.

TRHH: Props to you for not buying into that shit.

Osbe Chill: Yeah, man. I appreciate it. It was hard. You know, you want the hits on Billboard and you wanna make sure you’re bringing money into the label so they can recoup the money they gave you and all of that stuff. I actually was in a great situation where I didn’t owe so much money. It was a learning experience. Don’t get me wrong, it wasn’t a bad experience at all. I enjoyed it and I learned a lot.

TRHH: Who is the Soul Rap LP made for?

Osbe Chill: The people. I made it for the people. My people.

Sherron Shabazz is a freelance writer with an intense passion for Hip-Hop culture. Sherron is your quintessential Hip-Hop snob, seeking to advance the future of the culture while fondly remembering its past.
View all posts by Sherron Shabazz →
This entry was posted in interview and tagged DoughNetworkz, GiveEmSoul, Got On, In the House, Los Angeles, North Carolina, Osbe Chill, Soul Rap, South Central, Spark. Bookmark the permalink.