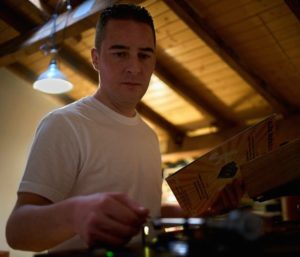 Music is in Alex Rocks’ blood. Rocks plays piano, guitar, and bass in addition to being a DJ. The Spaniard plays in a live band and deejays for Radio Gladys Palmera. Alex Rocks has also ventured into production and recently released his debut album, Rise N Shine.

Alex Rocks chatted with The Real Hip-Hop about the Hip-Hop scene in Spain, his love of deejaying, and his new album, Rise N Shine.

TRHH: Why did you call the new project Rise N Shine?

Alex Rocks: Actually it was Sleep and me who decided to use this title. It was the last track we worked on together and we just really liked it for the album as well.

TRHH: How did you assemble the artists that are featured on Rise N Shine?

Alex Rocks: I got in touch with them through social networks. I really dig their style and loved the stuff they were putting out.

Alex Rocks: It kind of came naturally after I started deejaying. After several years spinning and collecting records I became aware of the many samples I was finding while digging. My first sampler was an Ensoniq EPS 16+, and sometime later I got an AKAI 2000 XL, which I make my beats with to this day.

TRHH: What led you to start Spain Diggin’?

Alex Rocks: I started the Spain Diggin’ project after several years of collecting vinyl. I was meeting all these other Spanish collectors, buying records off them or exchanging material, I just thought it would be interesting to let them talk about their passion.

TRHH: Do you prefer deejaying over producing?

Alex Rocks: Deejaying to me is really important, it’s where it all began – sampling scratching, beat juggling, trick mixing. I do think both DJ’s and producers should work with vinyl and analog samplers like back in the day, I think that with digital the sound changes too much. But anyway I don’t like to put deejaying before producing or vice versa because I feel they go hand in hand – if you don’t have vinyl records you can’t sample and produce Hip-Hop with the right sound.

Alex Rocks: There are a lot of very good artists, but I usually listen to American underground Hip-Hop, jazz, funk, soul, disco, and so on. Old stuff and new – I like to be up-to-date on what’s cooking in every genre, which takes up a lot of my time.

TRHH: Do you have a favorite song on Rise N Shine?

Alex Rocks: I have to say all of them. I’ve been working on those productions for years, and we chose the best beats I had to date, avoiding any kind of filler. I couldn’t choose any in particular; they’re all special to me.

Alex Rocks: Good question, but a tough one. There are so many, both from the old school and the new. To be honest I would probably have a heart attack if I would ever get offered an opportunity like that. I can give you some names: Smif-N-Wessun, Rakim, Sadat X, Rob-O, Grap Luva, C.L. Smooth, Q-Tip, KRS-One, Black Moon, Nine, Busta Rhymes, Lord Finesse, Large Professor, but I could give you hundreds more.

TRHH: What do you hope to achieve with Rise N Shine?

Alex Rocks: I’d like the album to become a future classic for lovers of that golden age sound, and I hope to release many more records on vinyl. A shout to all my people, and thank you Sherron for this interview. Peace, fam. Much love!

Sherron Shabazz is a freelance writer with an intense passion for Hip-Hop culture. Sherron is your quintessential Hip-Hop snob, seeking to advance the future of the culture while fondly remembering its past.
View all posts by Sherron Shabazz →
This entry was posted in interview and tagged Alex Rocks, interview, Lovemonk, Madrid, producer, Rise N Shine, Spain, Spain Diggin’. Bookmark the permalink.