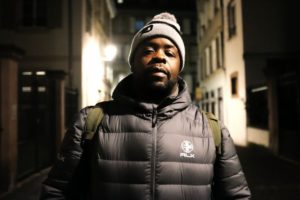 Photo courtesy of Below System Records

One of the rawest emcees in Hip-Hop is Phat Kat. For well over a decade the Detroit native has spit some of the most razor sharp lyrics in rap. His latest release is an ode to the old school called “The S.O.S Project.”

An acronym for “so old school” The S.O.S. Project is a 10-track album released by Below System Records. The album is produced entirely by German producer DJ Dister and features appearances by Ron D, La Peace, A Minus, and DJ Dez.

The Real Hip-Hop spoke to Phat Kat about working with the late great J Dilla, the hunger of emcees from Detroit, and his new album with DJ Dister, The S.O.S. Project.

TRHH: How’d you link up with DJ Dister to do The S.O.S. Project?

Phat Kat: We linked up on his previous Consistent Knockouts project. I got a song on there called “Rappin’ Ass Rappers” and the chemistry was so dope he said, “What do you think about doing a whole record?” and I said, “Shit man, let’s do it.”

TRHH: S.O.S. stands for “So Old School” but being old school has a negative connotation in Hip-Hop these days. What’s your opinion on the views that some younger artists and fans have of previous eras in Hip-Hop?

Phat Kat: My whole thing about that is if you wanna be great you gotta study the greats. How you expect to be a great artist if you don’t know your past? You gotta know your past or you’ll be looking crazy. Somebody will ask you some knowledgeable shit and you can’t even answer the question. That shit don’t make sense. You definitely need to study your history. I study mine. I know about all the greats that came before me.

TRHH: On the album you have a song called “Revolt for Change” that speaks on police brutality. Why do you think a riot and a revolt would be more effective than a protest? Do you think that a revolt would just give them more of an excuse to kill us all?

Phat Kat: It depends on how you go about shit. You gotta be strategic. When I say riot and revolt I don’t mean go and tear shit up and burn shit down. We’ve seen what happened in Detroit with the riots back then. It’s buildings that still standing up that they burned in the Detroit riots that they haven’t even tore down yet. I’m not telling motherfuckers to go burn and fight, but you gotta stand up for something. If you don’t stand up for something then you’ll fall for anything. You just gotta be knowledgeable about what you’re doing.”

Phat Kat: I mean, it’s a different producer! Just like it’s different working with Dister than Dilla, or Dilla and Pete Rock, or Dister and Black Milk, or Dister and Young RJ, or Dister and Nick Speed. It’s all different. Everybody got their whole different flavor. It’s just about having that chemistry with whoever you’re working with. You gotta be like peanut butter and jelly. That shit gotta fit. If it don’t fit you’re not doing something.

TRHH: There are a group of fans that view J Dilla as the greatest of all-time and there’s a group that say because he didn’t have a bunch of mainstream hits that he’s out of the conversation. What’s your opinion on that and where does Dilla rank amongst the great Hip-Hop producers for you?

Phat Kat: I always told Dilla he was the greatest when he was here. He looked up to Pete Rock. To me it’s Dilla, Pete Rock, and Preemo. When people say you can’t put him in that context okay well what about all the hits he did for Busta Rhymes? What about Janet Jackson? Erykah Badu? Tribe Called Quest? You fuckin’ name it, man. Who is saying he didn’t produce for mainstream artists? Where are you getting that from?

TRHH: Actually it was Chris Rock who said that most recently [laughs].

Phat Kat: He don’t know what the fuck he talking about! Real talk! He need to do his research. And that shit he did on Rick Ross shit was wack. That shit was garbage, man.

TRHH: I agree with you on that.

Phat Kat: That shit was horrible. He didn’t need Chris Rock on there, man. And he sounded like he was drunk as hell, too.

TRHH: And he didn’t sound genuine.

Phat Kat: Nah man. That shit sound like he got paid.

TRHH: Definitely. On the song ‘The Monument’ you speak on Detroit and your sound. While the South seems to have a stranglehold on popular rap I feel like some of the best music has come out of Detroit in the last 15 years or so. What is it about Detroit that the artists that come out have that certain grit and authenticity?

TRHH: What’s next up for Phat Kat?

Phat Kat: I’m working on a new record. Me and my man Katalyst from Australia are in talks to work on a new record. Shit, I’m always recording. I got a tour coming up following The S.O.S. Project. That’s what I really been doing – I’ve been doing a lot of touring and having my feet kicked up over in Europe. That’s where I be at.

TRHH: I’ve interviewed a few cats who’ve said this, but I think it was Redman who said Europe is where it’s at…

Phat Kat: Because over there they respect the artists more and they respect what came before them. They know their history and they’re knowledgeable on all the shit that the great artists were doing back in the day. From the 80s all the way till’ now they’re very knowledgeable. You’ll get on stage and have a fan asking you, “Dude, on ‘Cold Steel’ when you said bla bla bla what did you mean by that?” They really up on their shit over there. You can’t really come with no weak shit ‘cause that shit ain’t gon’ fly over there.

Sherron Shabazz is a freelance writer with an intense passion for Hip-Hop culture. Sherron is your quintessential Hip-Hop snob, seeking to advance the future of the culture while fondly remembering its past.
View all posts by Sherron Shabazz →
This entry was posted in interview and tagged Below System Records, Berlin, Detroit, DJ Dister, Germany, interview, Michigian, Phat Kat, Phat Kat & DJ Dister, Revolt for Change, Ronnie Euro, So Old School, The S.O.S. Project. Bookmark the permalink.