K’Valentine: Here For A Reason 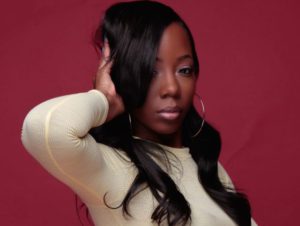 Chicago: The City of Broad Shoulders. Its inhabitants are inherently tough. Since the days of prohibition the city has been rife with crime. In the inner-city poverty, segregation, poor public education, and blistering winters make survival in Chicago all the more difficult. Despite the harsh circumstances there are more success stories than failures. One such success story is K’Valentine.

Coming from less than ideal circumstances after her father was murdered when she was just six, K’Valentine turned her pain into poetry. She released a couple of mixtapes on her own before catching the ear of BK MC Talib Kweli. Valentine joined Kweli’s Javotti Media record label and the result is a 12-track album appropriately titled, “Here For A Reason.”

The Real Hip-Hop spoke to K’Valentine about her relationship with Talib Kweli, what drives her to excel in the music business, and her new album, Here For A Reason.

TRHH: How does it feel to finally have your album “Here For A Reason” out?

K’Valentine: It feels great. It’s a blessing to be able to share something with people that I’ve been working on for a long time now. It feels good. I was just telling DJ Spin that I couldn’t believe it. The first day it came out I was like. “Man, I got an album. My album is out.” It felt surreal in a sense. It feels great. If I had to describe it I’d say it’s a blessed feeling.

TRHH: Why did you title the album “Here For A Reason?”

K’Valentine: I titled it “Here For A Reason” because the end of 2015 I was hit by a drunk driver and I survived the car accident, of course. Prior to that I had been struggling trying to figure out what I would call the album, but after going through something as traumatic as that and coming out of it with no permanent damage that was just what I felt like I should name the album. I felt grateful to still be alive and I feel like I’m here for a reason.

TRHH: Is the song “That’s Real” based on real life situations?

K’Valentine: That song is based on my hope that I will one day get to experience that. I haven’t experienced the love I speak of on “That’s Real.” It was me speaking it into existence. It’s based on other people’s love that I’ve been able to observe, but not personal.

TRHH: That’s surprising actually. Is there a reason why you haven’t experienced that kind of love?

K’Valentine: It just hasn’t happened yet. Not to say that I haven’t been in love but the love that I speak of on “That’s Real” is real love and real love to me is reciprocated. I’ve been in love before, but I’ve had my heart broken so it obviously wasn’t reciprocated from the guy. If that makes any sense [laughs].

TRHH: It does. It’s a one way relationship kind of thing, right?

TRHH: I was surprised at how versatile “Here For A Reason” is. Did you set out to make the album with different styles or did it just come out that way naturally?

K’Valentine: Naturally. Basically what I do is I get the production and I let the production begin the song and I finish it. I let it begin the story and I finish it with the lyrics. When I would speak to producers and they would ask me what type of beat I was looking for I was never able to give them a straight answer because I like all different types of beats. I would listen to what they sent, pick out what I like, and write to it.

TRHH: You never write lyrics without the music? You always write to the beat?

K’Valentine: I wouldn’t say that. I can just be going about my day and lyrics will pop in my head so I’ll write ‘em down in my phone. But for the most part I do like to write to the beat.

TRHH: Chicago can be a hateful place, even in Hip-Hop circles. What has your experience been like coming up in the Chicago Hip-Hop scene?

K’Valentine: In Chicago the more popular sound was drill. You have Chance the Rapper and Vic Mensa and they have different sounds. I would say I wasn’t really included in that circle. I don’t wanna say anybody hated on me, but I’m just in my own lane, minding my own business, and making my music the way I wanna make it. I go where the love is. I’m in New York often and New York shows love.

TRHH: New York has not historically shown love to people who are from outside of New York. I don’t know if you remember Outkast being booed on stage at The Source Awards in ’95…

K’Valentine: I didn’t know that.

TRHH: You didn’t know that?

TRHH: I love the vibe of the single”Family,”what inspired that song?

K’Valentine: It was actually production. In that song I was speaking from a more personal place. I’m just speaking on my family so I don’t know who wouldn’t be able to relate to that song. That’s usually your first circle of influence and support. Those are the ones who hear everything you do first and then it trickles down to your friends and associates. I’m pretty close with my immediate family.

TRHH: You’re also close with Talib Kweli. What’s it been like working with him and what’s the best advice he’s given you about the music business?

K’Valentine: Working with Talib has been an awesome experience. I’ve been informed about a lot of things that I didn’t know about. I know so much more about the music industry creatively and business-wise. He’s given me a lot of gems but one that I would say stuck out is when told me, “You don’t need the industry, the industry needs you.” He’s really big on having your rights and being independent. It’s amazing. I continually learn from him.

TRHH: I’ve been watching you grind and work hard for years. Last year I saw you at the Art of Rap Festival giving your all when the doors first opened to the venue and there were hardly any people there. What keeps you motivated and working hard during the tough times?

K’Valentine: Oh okay [laughs]. The fact that you have to keep going. Even if it’s a couple of people in the room you never know who is watching. It’s about being consistent. I can’t be at one show giving all of my energy and not the other. It doesn’t matter how many people are there. Just having that mentality that this is really what you wanna do so whether the room is filled or not you’re gon’ still deliver.

TRHH: What do you hope to achieve with Here For A Reason?

K’Valentine: I hope to gain respect as an artist and gain more exposure. I’ve put out mixtapes prior to but this is my first all original body of work. It’s me from the first track to the last. I just hope to also be able to uplift and empower people and remind them that there’s still artists here who care about love and who care about giving people hope and exchanging positive energy. There’s people out here that you can still relate to. It’s a lot of Hip-Hop out there where they party 24/7. I don’t really know people that do that. It’s not a realistic lifestyle. I just hope to capture hearts, capture minds, and inspire people.

Purchase: K’Valentine – Here For A Reason

Sherron Shabazz is a freelance writer with an intense passion for Hip-Hop culture. Sherron is your quintessential Hip-Hop snob, seeking to advance the future of the culture while fondly remembering its past.
View all posts by Sherron Shabazz →
This entry was posted in interview and tagged Chicago, Family, Here For A Reason, Illinois, interview Javotti Media, K’Valentine, That’s Real. Bookmark the permalink.