Posted on September 5, 2016 by Sherron Shabazz 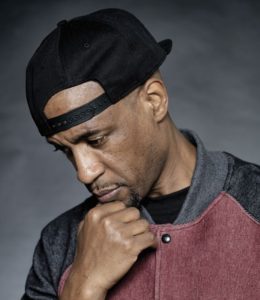 From the start of his music career Masta Ace has always pushed the creative envelope. His projects come across as more movies than albums. Ace beautifully intertwines beats and rhymes with stories that everyone can identify with. Ace’s latest release adds on to his legacy of making full-length albums that display his talents as a storyteller and a lyricist.

The Falling Season is an album that takes us back to Masta Ace’s high school years. Ace guides the listener through the highs and lows that he experienced during his most pivotal years in his home of Brownsville, Brooklyn. The album is produced entirely by KIC Beats and features appearances by Chuck D, Your Old Droog, Pav Bundy, A.G., Nikky Bourbon, Torae, LT, Queen Herawin, Wordsworth, Stricklin, Cormega, Beej Gordy Brooks, Deion, Denez Prigent, Pearl Gates, World Famous Supreme Team, and the Hypnotic Brass Ensemble.

The Real Hip-Hop spoke to Masta Ace about The Falling Season, why making the right decisions is critically important for young people, working with producer KIC Beats, and his dream of writing for the big screen.

TRHH: Explain the title of the new album, The Falling Season.

Masta Ace: The album takes you back to my high school years between the ages of 13 and 18. That’s kind of the age I feel like young men make sometimes the wrong decision and sometimes the right decision. When they make those wrong decisions at that age it’s the time of your life where one wrong decision could impact the trajectory of your life and send you in a whole different direction. I found at that age that a lot of cats that I was hanging with started to fall, make mistakes, go to jail, and just go in different directions in their lives and they never really recovered from it.

Masta Ace: That’s kind of the age were you’re sort of transitioning from kid to young man. You can kind of see adulthood right in front of you. Once you hit the teens you start thinking you know everything and nobody can tell you nothing. You think you got everything figured out and your parents don’t know nothing. You start going out there and making those decision. At that age also you start hanging out a little bit later and kind of do your thing a little bit. You’re able to have a little bit more freedom but sometimes in the city that freedom is a bad thing because you wind up being with the wrong kind of people in the wrong kind of situations. If you haven’t been given the right foundation from a parent then you can easily fall into the wrong trap.

TRHH: How long have you had this concept in mind for The Falling Season?

Masta Ace: This concept really just came up when I wrote the first song for the album. I had a bunch of beats but the first song that really came to me and made me want to write was the Young Black Intelligent record. Once I wrote that record it kind of spells out what I was going through at that age – the struggle growing up in Brownsville, Brooklyn, having friends that went a different direction, feeling that pressure to not necessarily be a good student because that was a cool thing to be, but wanting to do what felt right to me. Once the lyrics were written I knew exactly what the album was going to be about.

TRHH: Young Black Intelligent is a song that I relate to. Unfortunately a lot of young, black, intelligent children have to deal with feelings of isolation in their own neighborhoods and even some homes. What inspired you to write that song?

Masta Ace: The song just really spoke to who I was at that age and that time of my life coming up in the neighborhood that I came up in. So many of the kids that I hung with on a daily basis and played football with had no interest in school or anything related to school. They were really all about the streets. For a while there had I made one or two different decisions you and I wouldn’t be talking right now. There would be no artist named Masta Ace. My fate would have been completely different. I wanted to tell the story of that struggle. I didn’t even think about how it could relate to other people, I just wanted to tell the story from my perspective. It just so happened that many people, and many young people now can relate to being in that situation.

TRHH: Did you purposely have KIC Beats produce the entire album or did it just turn out that way?

Masta Ace: It’s purposely because I was looking for a producer or producers that could put together some music that was sample free or pretty close to it. When I heard his sample free music it still felt like it was samples. That’s what I was looking for – somebody who had music that sounded like samples even though it wasn’t. Once I heard his little library of beats I knew that he was the right guy to do the whole thing. Right away I picked out 4-or-5 that I definitely wanted to write to. That just carried through the whole album.

TRHH: Why was it important to have sample free music?

Masta Ace: At the time the album that I was working on was supposed to be for Penalty which is distributed by Sony. It was made very clear early on that we couldn’t bring any music that had samples in it because it was going to create an issue because of the Sony name. When people see that Sony name and they know that you used their music they’re gonna come after you with guns blazing. That was the initial reason why I was looking for a producer that was sample free. They worked on the eMC album as well. As the project came together I just felt like it wasn’t the right home for the album and decided to move it, but I stayed with the plan.

TRHH: How long did it take to complete the album?

Masta Ace: If you count mixing and everything it took a year. In terms of writing, picking all the beats, and creating the songs it was probably 7-8 months. I was on the road with eMC and that kind of slowed the process down. It wasn’t like a continuous 8 months working on it. I was out promoting the eMC record and doing shows with them so I would take big blocks of time off while I was touring with them and then I’d come back and work on it some more.

TRHH: You have a lot of great guest appearances on The Falling Season; talk about the joint you have with A.G. on the album.

Masta Ace: That’s probably the one record on the album that doesn’t have anything to do with the theme of the album. There is no message there that connects with the theme of the album. He and I had collaborated on a few records together over the last maybe year or two. I felt like we had good chemistry musically. I felt like we were a good match. I’ve known A.G. for a long time. We’ve been cool for years. I decided to reach out and see if he was down and he was definitely down to jump on it. That just made it all the better.

TRHH: Was this album the most autobiographical of all your albums?

TRHH: What’s next up for Masta Ace and M3 Records?

Masta Ace: Next up is a project with Marco Polo next year. I’m trying to really transition into writing screenplays. I have a TV show idea that I’m developing. I want to take my writing to other areas — TV, movies, big screen. That’s where I’d like to go with it – that’s what I’m pursuing.

Sherron Shabazz is a freelance writer with an intense passion for Hip-Hop culture. Sherron is your quintessential Hip-Hop snob, seeking to advance the future of the culture while fondly remembering its past.
View all posts by Sherron Shabazz →
This entry was posted in interview and tagged Brooklyn, Brownsville, interview, KIC Beats, M3 Hip Hop, M3 Records, Masta Ace, Me & AG, New York, The Falling Season, YBI, Young Black Intelligent. Bookmark the permalink.