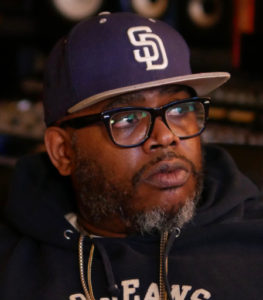 Raticus gave The Real Hip-Hop some insight into working with Ruste Juxx on their new album, King of Crime Heights, how he achieves his signature sound, and his upcoming projects for 2019.

Raticus: Social media. I met Ruste back in the day when Helah Skeltah was recording Magnum Force at a studio I worked at. I didn’t really know who he was at the time. I’ve always followed him. I reached out to him on Instagram and we started building. I didn’t expect to do 20 songs, but we got in such a good rhythm and the King of Crime Heights was born.

TRHH: What was the process like for you guys recording KOCH?

Raticus: In the beginning I sent him some beats, he picked them out, and went into the lab and started writing to them. As we got deeper into the process I started throwing concepts at him. This guy is an amazing workaholic. He’s extremely professional and gives you quality material. In the process I just let him go in there, feel the flow, and as we got deeper into it I started throwing concepts at him.

TRHH: The song “Ginsu-Sharp” sounds like something from a movie score. Without snitching what genre did that sample come from?

Raticus: [Laughs] You know what, that is a mash-up of mad samples, actually. I did that beat so long ago I can’t even tell you what the original artist is on it. All I could tell you is that I have no limitations on where I sample from. Just put a record on and if I hear a sound I like, I chop ‘em up. I don’t remember what genre it is. I was actually surprised he chose that beat, but it definitely came out pretty dope.

TRHH: Why were you surprised?

Raticus: Because like I said, it was a mash-up of mad samples. I’d just started working with the dude. A lot of emcees are intimidated by those types of beats. A lot of emcees like standard loops where there’s not a lot of ingenuity in the beat. You heard something and you loop it up. This one I chopped up from one or two records. This guy is such a professional that he’s able to see visions that others aren’t able to see.

Raticus: I’m not only a beat-maker, I’m also an engineer, and I also master. In terms of making beats I rotate around an MPC 4000, an MPC Renaissance, and I just got the MPC X. For the Ruste Juxx project most of the album was done on the 4000 or the Renaissance. In terms of engineering I have a lot of analog gear. I’m an analog gear guy. My first record came out in 1996. In 1997 I was able to get an internship at a very popular studio – the studio where I told you I met Heltah Skeltah and all them there. Through that I was able to learn about analog gear. I built my own studio. It’s a three-stage process for me. I’m a producer, a DJ, and I’m also an audio engineer and a mastering engineer.

Raticus: Deejaying came first back in the 80s. I tried to rhyme a little bit, everybody does. From there I became a producer. Because I was doing the beat-making and producing I wanted to learn how to mix my own stuff. The deejaying was first and beat-making was what I spent the majority of my professional career doing.

TRHH: I dabble in production and the mixing part is the most frustrating part for me. It’s very tedious. What advice would you give to someone who wants to be an engineer or is trying to mix their own music?

Raticus: It’s funny you asked me that, my cousin who is a part of Pro Era with Joey Bada$$, his name is Rokamouth, was asking me the same exact question. He produces now and is having trouble mixing stuff. All I can tell you is the way I learned is a lot of trial and error and a lot of comparing my mix to a mix that I like. I don’t think there is any real quick way to doing it. I think that you have to commit to wanting to learn it. Learn the purpose of the different types of tools. For me, DJ Premier was the guy that I decided I would look up to in terms of Hip-Hop music. Any time I would do anything there would always be some type of DJ Premier beat or song that I could bring up and try to dissect in terms of how the sounds are hitting on a Spectrum analyzer. I can tell that the kick is giving me like 10db of sound versus a hi-hat is really low. It’s like a science for me. Again, it took several years of doing this. The worst thing you can do is not continuously work at it and try to get different opinions and ideas, which can help you build your own sound. You definitely have got to go out there and experiment, and don’t be afraid that this thing is going to sound crappy to somebody. You need that input.

TRHH: What’s your opinion on how mainstream Hip-Hop has moved away from sampling over the years?

Raticus: In terms of monetarily I think that’s great. You’re not worried about owing somebody or getting sued for sample usage. When I was talking to my cousin, Rokamouth, he doesn’t sample, he just uses electronic sounds — I told him I’m glad that you learned it that way because when it’s time to put your music out you have no problem with clearances and all the money is yours. In terms of the sound of it, I’m very disappointed in it. It’s lost the edge of what I was brought up on in terms of Hip-Hop. It doesn’t have that edge. It has a friendlier sound. Hip-Hop to me is grungy and dark. You’ve got some happier sounding ones too, but happy is normally soulful for me. Again, on the business side I’m happy that it made that transition because you own more of your stuff. In terms of the sound, I’m not happy with the way it sounds. Don’t even ask me about the actual emcees and what they’re doing. It’s probably a handful of good emcees that come out now. The rest of them are just doing whatever is catchy. It’s catchy, but there’s really no substance behind it.

TRHH: On the song “Guerilla Groovin’” the hi-hats make the song stand out to me. How’d that song come together?

Raticus: [Laughs] Thank you, thank you. The hi-hats are part of a drum kit. To me the strength of that song are the drums. You’re specifying the hi-hats, but the hi-hats are a part of the drum kit. It was a drum loop that I found, chopped it up, and played it my own way. I didn’t do any specific focusing on the hi-hats to be honest with you. It was really the tail of the kick and the snare. I didn’t have an individual hi-hat sound is what I’m saying. The hi-hat is embedded on top of the kick and at the end of the snare. It’s just a matter of the way I chopped it up and decided to play it. The mixing of it with the actual sample allowed it to shine the way it shined. Going back to all my old samples and finding the right drums to go with that sample was a part of the process.

In terms of making the song, again, it was one of the first songs I did with Ruste Juxx. I didn’t really give him any instructions. He selected the beat, we decided on the date to go do it, he came back with that, and I was extremely impressed. This made me want to continue to work with this dude because we got into a great rhythm. Another thing I want to say is I’ve worked with other guys and his turnaround time, I don’t know how he’s able to create all these individual songs. He’s not only working with me when he’s doing this. He’s doing collaborations with other people and has other projects. For him to have all of these unique compositions it’s just a tribute to how great this guy is.

TRHH: Do you have a favorite joint on KOCH?

Raticus: Put it this way, I put out Ginsu-Sharp in February of last year just to get a buzz generated. I had all these songs to mix and I didn’t want to mix them all and wait all that time. It takes time to mix songs. When I was done mixing the rest of the 18 songs after Ginsu-Sharp, the one that stood out to me was Guerilla Groovin’, this is why I put that out next. I thought it stood out. However, when I think it’s all said and done it’s either the song with Skyzoo called “Uncomparable” where both emcees were at the top of their game on the song. I added a lot of cutting and scratching and the beat is bananas. A song also with him and Blaq Poet is pretty much the same thing I’m describing with Uncomparable, and a song in the beginning with Kil Ripkin called “From Da Slumz.” I was very impressed with how Kil RIpkin came out of his element a little bit to do that song. Kil Ripkin is more of a positive message type of emcee. When I first met him, he was more of a street rapper and he was able to bring that back out in that song. Those would be my three. I can’t say which one is the best. I’ll let history decide which one is the best. There are a lot of songs on there, so I’m sure different people are going to have different favorites.

Raticus: Good question, thank you for that. I mentioned Kil Ripkin and I have six songs with him completed for an album. I think I’m going to be putting that out first. We have to do about four more songs. I also have a project with Punchline from eMC. We already started discussing it. He already has three tracks for me. Then I have two other projects that I really don’t want to let out of the bag because one of them is going to be a surprise and the other one I haven’t fully finished the parameters of how me and this person are going to work this out together, in terms of the business side of it. For sure the Kil Ripkin and Punchlines projects, look out of for those. I’m not sure if I’m going to do those on vinyl, but those are definitely coming.

Sherron Shabazz is a freelance writer with an intense passion for Hip-Hop culture. Sherron is your quintessential Hip-Hop snob, seeking to advance the future of the culture while fondly remembering its past.
View all posts by Sherron Shabazz →
This entry was posted in interview and tagged Brooklyn, Flatbush, Ginsu-Sharp, Guerilla Groovin’, interview, King of Crime Heights, New York, Raticus, Ruste Juxx, Tenement Music. Bookmark the permalink.