Posted on September 12, 2016 by Sherron Shabazz 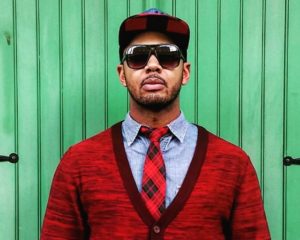 Substantial and Marcus D make up the group Bop Alloy. Originally from Maryland but now residing in Virginia, Substantial is the emcee of the group. A veteran artist, Substantial boasts one of the best voices in Hip-Hop with substantive lyrics to match. Marcus D is a producer from Seattle, Washington who currently resides in Tokyo, Japan. Marcus’ music merges his talents as a pianist with that classic boom bap sound.

Bop Alloy’s most recent release is a 5 track EP titled “Present EP.” The project is produced entirely by Marcus D and features appearances by Precious Joubert, Intelligenz, and Steph the Sapphic Songstress.

One half of Bop Alloy, Substantial spoke to The Real Hip-Hop about The Present EP, his role with the HipNott Records label, and his upcoming solo album slated for a fall release.

TRHH: You and Marcus D have been making music a long time on your own. How did you initially come together to form the group?

Substantial: We initially came together after he reached out to me a minute ago, back when Myspace was still a thing. He contacted me through Myspace and asked me to hop on some tracks on his debut album. We basically kept in touch and kept working. I stepped to my agent that was handling my stuff in Japan at the time and told him if I did an album with this kid it would probably go pretty well. I mentioned it to Marcus and we had already done three or four tracks by that time. We’ve just been making music together ever since.

TRHH: Where does the name “Bop Alloy” come from?

Substantial: Around the same time that I had that conversation I figured if we were gonna do a project that we needed a name for it, or us together. A lot of the production that he was sending me was jazz influenced. It was fusing jazz with Hip-Hop so I basically tried to come up with something that summed it up really well. Bebop is a well known style of jazz so I just shortened that and went with bop. Alloy is a type of metal fusion. So I just used those words to describe our sound and we’ve been rocking with the name ever since.

Substantial: Present is part three in a series of EP’s that all lead up to my solo album. The solo album I’m working on is called “The Past is Always Present in the Future.” There were different EP’s that tie in to different portions of the full album. The first EP that came out was called “The Past” the second one was “Always” and now “Present” is the one we just released. The songs that fall into the “Future” section are all gonna be included on the album. We went with Present for this particular EP because it’s part of the title for my album, but also of all the producers that I collaborate with Marcus D is the one I presently collaborate with the most. So when I was choosing who would handle the production for that particular EP it made the most sense to work with the guy I work with the most right now.

TRHH: Tell me about the song The Sub Way.

Substantial: I was basically vibing to the beat that Marcus sent – it’s an amazing track. When you’ve been writing as long as I have the challenge is coming up with an original concept. The first thing that you have to accept is the chances of you talking about something that no one has ever talked about before is slim to none. The least I can do is come up with a creative way to do it. I talk about my life growing up in Maryland and the other areas I lived leading up to present day. It’s tied into the title of course, but I wanted to use the various subway trains that are tied into all of the neighborhoods that I describe. It starts in Maryland then it goes up to New York and I mention all the trains around there. Then I talk about the MARC train in Baltimore which is how I used to get back and forth to D.C. and PG from Bmore when I wasn’t driving, and eventually Virginia where I’m resting at now. I figured using the subway would be an interesting way to tie my life story together.

TRHH: What’s your recording process like with you guys being on opposite ends of the country?

Substantial: Most of the time it depends. If we’re working on something for the other’s project that will determine who hits up who first. In this particular case when I started working on this project I hit up Marcus and was like, “This is what I’m thinking.” He started sending me tracks, we’d have enough tracks, and then we wouldn’t ‘cause I’d change my mind about one. As the process was going on he’d e-mail me the beat, I’d open it up in a session and lay down what I call “scat tracks” where it would be no words. I’d just be scatting over the beat with different flows over whatever melody. I’d develop the idea, lay down a rough, and send it back. He’d give feedback. It’s at least one phone conversation a week, a whole lot of e-mails, and a couple of text messages on the joint until we got it where we needed it to be.

Substantial: At HipNott I’m Head of A&R. I’m also an artist on the label. That’s how I first came into the fold. Maybe a couple months into my contract with them as an artist they offered me a job as Head of A&R with the label. That was maybe March of 2015.

TRHH: Has your role at HipNott Records changed the way you create and view music?

Substantial: I wouldn’t say it’s changed how I create or approach music. The only thing now is I spend a lot more time on the phone with artists making sure they have what they need, following up with different things, and pitching ideas to them – just whatever they need to help make their project happen. Truthfully it’s not too different from what I’ve been doing for years with different artists that I knew needed my help, it’s just now I get paid for it [laughs]. We all kind of know a bunch of artists so if you’re like a big brother to a lot of them you’re always offering advice. You’re always making calls on their behalf, linking them with whoever, kind of going out and checking out the latest acts and taking one or two under your wing. That’s something that I always did even when I was doing demos, it’s just now it’s in an official capacity.

TRHH: Give us some insight into the upcoming solo album.

Substantial: As I mentioned before the new album is going to be called The Past is Always Present in the Future. Right now I have production from Oddisee on there, The Other Guys, Marcus D, my man Algorhythm from The Stuyvesants, Gensu Dean off of Mello Music, and John Lane who is part of Oddisee’s band, Good Company. There’s a lot of great production. The title is somewhat self-explanatory like, no matter how much things change over time there are certain things from our past that will remain constant, which I think applies heavily to what we see going on in the world right now with police brutality and a long list of other issues that are facing the black community. So I think it’s something that we kind of know to be true, I just feel like The Past is Always Present in the Future is the perfect way to sum up what we’re seeing.

The album deals with a lot of those things. It talks about legacy – recognizing what I’m ultimately gonna leave behind, cause I ain’t gonna be here forever. And basically making from that standpoint and recognizing the fact that I can get out here, tap dance, and do all this bullshit that a lot of artists do to make money, however if it was all about that for me I’d just hit the block [laughs]. I decided to go this route with my music because I saw this as a vehicle to not only help myself, but other people. Starting with my community and branching out and affecting change throughout the world. I recognize the power of this art and me putting a lot of thought into what I’m doing and making sure my legacy is one I can be proud of, and more importantly my family can be proud of.

Sherron Shabazz is a freelance writer with an intense passion for Hip-Hop culture. Sherron is your quintessential Hip-Hop snob, seeking to advance the future of the culture while fondly remembering its past.
View all posts by Sherron Shabazz →
This entry was posted in interview and tagged Bop Allow, Cheverly, HiPNOTT Records, interview, Marcus D, Maryland, Present, Present EP, Seattle, Substantial, The Past is Always Present in the Future, Virginia, Washington. Bookmark the permalink.