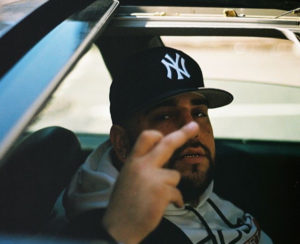 Bub Styles is the epitome of what being “on that Brooklyn bullshit” means. His rhymes are street-themed like the Notorious one who first coined the “Brooklyn bullshit” phrase, and his voice is reminiscent of one-half of BK’s very own Mash Out Posse, Billy Danze. Brooklyn, stand up!

Bub Styles: So, basically, I had a freestyle up at Sway and to promote it I was saying, “I’m going to be talking very sucio, muy picante.” Sucio means dirty and picante means spicy. I was like, “This is the way Im’ma be talking on this shit. I’m going to be dirty and super-spicy with it.” From then on it just kind of became something I would say when I was dropping something. I decided to put it into my brand because it sounds hard and it sounds weird, too. That’s how I’m coming with it – dirty and spicy.

TRHH: How would you compare this album to your last album with Ace Fayce, Long Nights, Cold Winters?

Bub Styles: I would say the sound kind of sticks to the same roots, but I would say this one is a little bit heavier. Long Nights, Cold Winters was definitely a little darker and a little bit more sinister. This new album has a lot of that same dark feel to it, but at the same time this shit booms way more than Long Nights. We described it as Long Nights make you vibe and this one makes you knock your head until your fuckin’ neck breaks. While they both share similar themes, this one definitely has a little more knock to it.

TRHH: The song “Two Piece” features Fastlife; how did that collab come about?

Bub Styles: That was simple, man. We had a lot of mutual friends already. I wasn’t really hip to his movement yet. I actually went to a Benny the Butcher show and he was opening for Benny. I swear to God, he was the only one who killed it on that whole show – besides Benny, of course. The crowd was silent for all the openers and when he came on he really ripped that shit down. I was like, “Yo, who is this cat?” I ended up looking him up and I’m lookin’ at this IG and I’m like, “Oh shit, we have mad mutual friends.” I was like, “Fuck it, let me hit him up.” It was like one of those simple internet things that turned really dope. He ended up coming by the studio. The first time I met him was when we recorded that “Two Piece” joint. Shout out to him.

TRHH: Why did you release this album so soon after State of Fleemergency?

Bub Styles: This album was actually supposed to be out for a little while now. We ended up kind of pushing it back because of the quarantine. The quarantine was just kind of kicking in and it was a big thing in the news. We didn’t want to muddy our release with all of this news, but I still wanted to drop something really bad. I was itching. I have so much music that’s not dropped. I kind of whipped together six tracks from random producers. I usually like to do a project with one producer. I whipped this one together with six tracks from assorted producers just to kind of put out. It was kind of meant to be a prequel to Very Sucio, Muy Picante anyway. That did its thing. People really gravitated toward that a little more than I thought they would since it is such a short EP. This album has been done. It’s time for this one. I’m hyped to get this shit out, for sure.

TRHH: You mentioned that the album has been done and the joint “Fat Farm” is over a year old; are the other songs on the album as old as that one?

Bub Styles: That might be the oldest joint on the album. That was with the homie Nems out of Coney Island and Brooklyn. He calls himself “The Mayor of Coney Island” and I can tell you after being out there to shoot that video, that shit is 100% accurate. Everybody knows him. Motherfucker is like the president out there. That is probably the oldest song on the project. We have a couple more that are a little on the older side as well. But again, this is like a project that me and Ace have been working on basically since right after Long Nights, Cold Winters. We do have a couple of tracks on there that are kind of on the older side, but everything fits together. I think Fat Farm really added to the body of work that we had going. Even if it’s old, even it’s out, a lot of people know about, fuck it, we’re gonna put this shit on there.

TRHH: When I listen to you I hear M.O.P. and Griselda. Are you inspired by those people?

Bub Styles: Fire. I’m from Brooklyn, so 90s Hip-Hop was a huge influence on me – M.O.P. included – Brooklyn’s own. I hear that all the time that I sound like Billy Danze and that’s a compliment. I think flow-wise I’m definitely different from him. I think content-wise I’m definitely different from him, but that voice is powerful, man. To say I have a voice like that is definitely a compliment. As for Griselda, I’m a big fan of Griselda. I think they started something really important in Hip-Hop right now. I’m a big fan of what they’ve done and I’ve been a big fan for 5-6 years now. But, that is kind of also after I was already making music like this. So, I would say they did inspire me, but I think I already had the groundwork for what I’m putting out nowadays. Definitely what also helps is they’ve inspired a lot of these producers to start putting forward those types of beats. I think that’s important because those beats are what we’ve been missing.

TRHH: Who would you say inspired you to want to be an emcee?

Bub Styles: I would say Big L is probably my biggest influence. Just the power in that man’s voice, the way he put rhyme schemes together, and the way you didn’t know if he was about to rhyme some shit and he comes out with it at that last millisecond and you’re like, “That’s perfect. How did I not hear that shit?” I think Big Pun definitely helped me craft my flow. The way you can speak so fast and so clearly at the same time was always something I took with me from Pun. Biggie, man. Just growing up in Brooklyn and being birthed by Biggie, pretty much it was always the power of his voice and his message. I think those three influenced me most. And Ghostface, fuck that! Ghostface, too!

TRHH: You mentioned super-lyrical guys and you’re a lyrical guy; what’s your writing process like?

Bub Styles: This project, I wrote all of this one in the studio. There are different ways that I write. Sometimes I’ll write when I’m in the crib, sometimes I think of something right away when I’m driving and have to jot it down, it’s a lot of different ways I do shit. With this project I did all the writing in the studio. All the lyrics were written for these beats. None of those lyrics were written before I heard the beat, which is what a lot of rappers do. They write generic 16s and slap it on to whatever beat fits the tempo. I really don’t like to do it that way. I really like to hear the feel of the beat before I decide how I’m going to approach it. A lot of it was Ace in the studio with me. He would play beats for me and we’d just go from there. A lot of it was him sending stuff in, me sending stuff back, and us going through the edits and whatnot. It was really a collaborative effort between me and Ace, for sure.

TRHH: Who is the Very Sucio, Muy Picante album made for?

Bub Styles: Very Sucio, Muy Picanta is made for people that want to hear passion. It’s made for people that give a fuck what a rapper is saying. It’s made for people that give a fuck about having old vibes, but with a modern feel to it. I feel like a lot of the rappers nowadays that try to go with the boom bap lane, it kind of gets drowned out and can really be played in ’95. If you played this in ’95 motherfuckers are going to be like, “he’s nice” but they’re also going to say, “he’s different.” I want to bring what birthed me while at the same time bringing it with that modern flavor. This is for everyone that really wants to hear that grimy shit, but also wants to be able to bump that shit in 2020.

Sherron Shabazz is a freelance writer with an intense passion for Hip-Hop culture. Sherron is your quintessential Hip-Hop snob, seeking to advance the future of the culture while fondly remembering its past.
View all posts by Sherron Shabazz →
This entry was posted in interview and tagged Ace Fayce, Brooklyn, Bub Styles, Bub Styles & Ace Fayce, Fat Farm, New York, NY, NYC, State of Fleemergency, Two Piece, Very Sucio Muy Picante. Bookmark the permalink.