Truth: The Fight for Survival 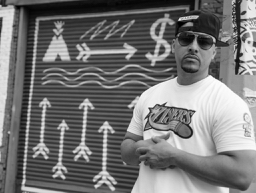 Queens, New York emcee Truth came on the scene in early 2016 with his debut album, “From Ashes to Kingdom Come” released by Ill Adrenaline Records. The album featured contributions from Hip-Hop heavyweights Psycho Les, O.C., AG, and the late Sean Price among others. The A+ cosigns put Truth on solid footing to venture out and become his own boss.

The Real Hip-Hop spoke to Truth about the trials and tribulations of starting his own record label, his favorite emcees from his borough of Queens, and his new album, The Fight for Survival.

TRHH: Why’d you call the new album, ‘The Fight for Survival’?

Truth: I don’t know if you’ve seen the album cover, but it has the rappers how they look nowadays, the fake IG model, the record exec as a snake, and the yuppie artist while I’m just trying to stay true to my roots – New York Hip-Hop, boom bap, and more substance over style.

TRHH: What’s your opinion on New York artists using the style that came from the south?

Truth: You can do whatever you want to do. I just feel like the era that I came from was based on originality and everybody sounded different. That’s how my outlook on music is. I feel like everybody should do music that way and try to separate themselves from other people as opposed to trying to sound like somebody else.

TRHH: How is this album different from ‘From Ashes to Kingdom Come’?

Truth: It has similarities. It’s the same kind of boom bap sound. I feel like this one is more elevated in terms of content and flow-wise. I kind of used similar producers from the first album. That album was also held due to the label that I was with at the time, so it’s newer music on this one. I feel like it’s From Ashes to Kingdom Come on steroids.

TRHH: Why did the label hold the album?

Truth: I had some disputes with them – money and also them just holding it. They kept holding and holding it and they finally just dropped it. They really never gave an excuse. They had other projects and were waiting, waiting, and waiting until they finally dropped it.

TRHH: And the label situation now is your own?

Truth: Yeah, it’s my own. Animal Military Records. I kind of did it on my own instead of going through a label and dealing with the headaches and shadiness with them. I did it myself. When I speak to a lot of artists who are established they always tell me to do it myself. I was a little afraid to do things on my own because of my lack of experience, but with the help of a lot of people it’s not as hard, but it’s more hustle yourself.

TRHH: What are some of the positives and negatives of running your own label?

Truth: [Laughs] Positives is you really get to see what you sell and you’re involved in everything. You learn a lot more from experience doing it that way, so if you ever go into a deal with someone else you kind of know what to expect. Going with somebody else you don’t know what you’re selling or what they’re doing, so you’re kind of left in the dark.

TRHH: How did the song ‘Extreme Measures’ come together?

Truth: I’m real cool with Royal Flush and I have a good relationship with Trag, too. I met up with Trag one day and we just banged it out real quick. I met with Flush another day and knocked that out. I just wanted to make some hard shit. Initially I had a sample, I gave it to PF, and he flipped it. I knew that was a feature joint because I was always talking to Flush and Trag about doing something. The first joint I did with them was Extreme Measures.

Truth: So many different artists. Growing up as a kid Run-DMC, Rakim, Wu-Tang, there’s so many from the 90s that were so original and different. Gang Starr, Guru is one of my favorite emcees, Juice Crew, and D.I.T.C. That kind of sound influenced me to want to pick up a mic.

Truth: It’s hard to say myself. I never would like to say one from Queens. I like G Rap. He’s the one that most sticks out. There’s so many talented emcees from Queens like LL Cool J, Pharoahe Monch, Large Professor, Tragedy Khadafi is one of the nicest, Prodigy. It’s so many, it’s hard to nail down one. It’s not one I would say in particular, but so many of them that encompassed that Queens sound. I feel like all of them helped to make up my sound and influenced me in some way.

TRHH: Would you say Queens has the best emcees of any borough?

TRHH: Who is The Fight for Survival made for?

Truth: It’s really for the true Hip-Hop heads. I put it on vinyl. It’s really for the people that cater to that boom bap sound – the sound that I grew up off of. But I have my own twist and my own way of putting things together. I mixed up different tracks. The Fight for Survival has some boxing influence to it. The Sheeple is a government kind of song. Toxic Temptress is another concept song. I intertwine conceptual things, but it’s more for the hardcore Hip-Hop fans.

Purchase: Truth – The Fight for Survival

Sherron Shabazz is a freelance writer with an intense passion for Hip-Hop culture. Sherron is your quintessential Hip-Hop snob, seeking to advance the future of the culture while fondly remembering its past.
View all posts by Sherron Shabazz →
This entry was posted in interview and tagged Animal Military Records, Extreme Measures, From Ashes to Kingdom Come, interview, New York, NY, NYC, Queens, The Fight for Survival, TNT, Truth. Bookmark the permalink.