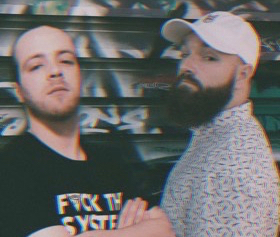 Day Dreams is a 5-track EP produced entirely by J57 with one track co-produced by Rob Viktum. The EP is released by J57’s FiveSe7en Collective label and features appearances by Copywrite, I.N.F of Dead Rabbits, and Little Thousand.

MCRE and Think 2wice of WNOL spoke to The Real Hip-Hop about the formation of the group, finding a balance between their rap lives and their real lives, and their new EP, Day Dreams.

TRHH: How did you guys get together to form WNOL?

Think 2wice: We actually met each other in 2015 through Instagram. The first thing that I remember was MCRE put on this contest on there called “MCRE Mondays” where people were rapping over a beat of his choice and you’d pick a winner. I was able to win that a few times. We kind of linked up from there. We started doing some videos and a couple of tracks together, then a lot of people suggested an album. We just built it from there.

TRHH: What’s the meaning behind the name, ‘When No One’s Listening’?

Think 2wice: We released an album before this EP that just dropped and that was the title that we came up with. We decided to actually turn that into our group name and start using that on our future projects.

MCRE: Me personally, I have three kids. The likelihood of dropping everything to pursue that is slim to none right now. Obviously, my day job is necessary for me to provide for my family. I think that’s the biggest barrier for me. It’s not a negative thing, it’s just the reality of it.

Think 2wice: For me I would say kind of the same thing. A lot of times you have to put in work somewhere you don’t want to be to get to a place you want to be. That can be tough. The grind can get at you over time. It’s that feeling of wanting something more, knowing you can do more, and feeling like you might be stuck somewhere you don’t belong at the moment.

Think 2wice: Well, for me to put it simply, it’s just fun. I just enjoy writing. It’s a great release, it’s great for stress and I just enjoy the hell out of it. I met a lot of great people. For me it just comes down to fun. I don’t see myself stopping until I die, really.

MCRE: It’s pretty much the same for me. Hip-Hop has always been something for me since I was in third grade. I remember rapping at a talent show at my school. It’s an outlet for me, a passion, and an addiction I’d say, too. I can’t not rap, no matter what. Wherever I go and whatever I do I’m always thinking about music. It’s more of an addiction at this point.

TRHH: It’s funny because I read all this stuff saying that if you really want to achieve your dream you have to go all-in. It’s just not reasonable sometimes. I remember reading an interview with Rhymefest and he talked about how he was a janitor at a middle school or something and somebody shit all over the walls. He said that day he quit and he’s been living off of rap ever since. He’s not huge or anything, but he doesn’t have a day job. I don’t know if that’s something I would gamble with.

Think 2wice: Yeah, I’m not even in a position like MCRE where he has a family. I don’t have any kids. If I had that responsibility as well it would make it even more difficult. For some people dropping everything and pursuing it is possible, and for some people it’s a lot tougher than that.

MCRE: We just kind of get in where we fit in with our music. I do most of my stuff when the kids go to bed. There’s different ways to look at it. You can pursue it full-time, but I’m still pursuing my dream of making music. I’ve achieved that. It’s not always black and white. There’s way to do it and pursue your dream without being famous or whatever.

Think 2wice: That’s honestly the inspiration from where When No One’s Listening came from, our first album. Everything that he said right there was really where we built that name from and where the whole idea around it came from.

TRHH: How would you say the Day Dreams EP is different from the When No One’s Listening album?

Think 2wice: I agree with that, and we’ve had more experience working together to where now it’s second nature. We’re used to working together and we collab well. We actually planned to make the first album an EP and it ballooned into an album. I think that was more of seeing how it would go and this is just a much more polished version. These are the best songs that we’ve released to date.

TRHH: How did J57 get involved in the project?

TRHH: What inspired the song ‘Read Up’?

Think 2wice: There was really a lot that went into that besides the obviously play on “read up” with the fact that our generation tends to hate on reading and educating yourself. It was also to shine a light and take a little shot at the current state of Hip-Hop and how it’s almost cool to be uneducated and dumbed down. That’s not something I or RE are really in support of and we wanted to address it.

TRHH: That’s interesting. What is your entry point into Hip-Hop? What era or what artist got you into Hip-Hop?

MCRE: I was living in Colorado and for me it was Naughty by Nature. The Chronic came out and everybody was listening to that. That just really got me into it.

Think 2wice: For me it’s that same era. The Chronic is a major one for me. I grew up on a lot of west coast since I’m from out there. That was where G-Funk and Warren G gave me some of the first memories I have of rap. I think I really started writing before I even knew I wanted to be a rapper. I thought it was cool and I wanted to try it.

TRHH: At what point do you think artists or Hip-Hoppers stopped reading up? When did it stop being cool to be knowledgeable about the culture?

Think 2wice: I don’t know if I could pinpoint it exactly to one certain time, but I do feel like it kind of happened over years. I would say toward the end of the early 2000s, 2008-2009 is where I would say there was a little bit of a drop off and it became popular in the sense that it’s more commercialized and it’s everywhere, which is a good thing, but it also had to start appealing to different audiences. Since it became more commercialized it suffered in that sense.

TRHH: Is it too late? Is the toothpaste too far out of the tube?

MCRE: No way. There’s so much talent – some of the mainstream and a lot of the underground. Last year was one of the best years of Hip-Hop in my memory with Black Thought, Royce, and other incredible albums being put out. Even though it’s not getting that commercial shine, it’s definitely being forced back on the culture’s forefront.

Think 2wice: I agree with that. I think people are starting to realize and are also getting a little bit bored with that type of music. There’s a lot more emotion being put back into it, so hopefully we’re at a turning point.

TRHH: Who is the Day Dreams EP made for?

MCRE: I think it’s made for anyone. Not just rappers, but artists of any kind who want to pursue their dreams but feel like it’s not their time or they just don’t have the ability to do so. I think a lot of people will connect with Day Dreams. We’ve heard a lot of good feedback from people that can relate to it. We also have a lot of Boom Bap on there with “Blow Smoke” and “What’s Next?” It’s some hard-hitting stuff that definitely connects with the 90s crowd.

Think 2wice: I would second all of that. That’s the main target we had when writing it. I would also add that if you’re a fan of lyricism, then I think we hit that one for you, too. Hopefully we can grab and draw in some new listeners.

Sherron Shabazz is a freelance writer with an intense passion for Hip-Hop culture. Sherron is your quintessential Hip-Hop snob, seeking to advance the future of the culture while fondly remembering its past.
View all posts by Sherron Shabazz →
This entry was posted in interview and tagged Connecticut, Day Dreams, EP, FiveSe7en Collective, interview, J57, MCRE, Oregon, Portland, Think 2wice, When No One’s Listening, WNOL. Bookmark the permalink.