Posted on September 14, 2015 by Sherron Shabazz 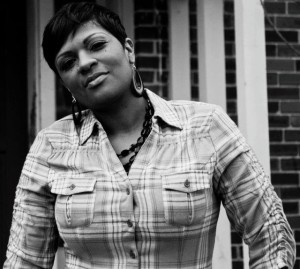 Not since the formation of Slaughterhouse has a collection of emcees with similar skill-levels put their pride to the side for the betterment of the culture. Heresy is an all-female rap group that is doing just that. Comprised of Monie Love, MyVerse, Carolina Dirty, and Dominique Larue, Heresy is a quartet consisting of four different voices, from four different places, with four distinctly different styles.

Emceeing is at the forefront of the cause for Heresy and it’s on full display on their debut EP of the same name. Heresy, the 5-track EP is produced by Mista Lawnge, formerly of Black Sheep and J. Rawls. The project was released in August on Rawls’ Polar Entertainment Label.

One-fourth of Heresy, Dominique Larue, spoke to The Real Hip-Hop about her start in rap, joining forces with her Heresy bandmates, and a slew of new music she has on deck for 2016.

TRHH: How’d you guys decide to get together and form a group?

Dominique Larue: This was Monie Love’s doing. Maja 7th tweeted her when Grand came out. He was like, “Check out the album. It’s a woman that’s rapping. All Bars. She got her clothes on,” shit like that. Monie clicked the link and followed me on Twitter. I followed her back. She DM’d me and asked for my information. She said she wanted to put together a group. This was like March of 2014. The ball didn’t really get rolling until the fall of 2014. At first it was just going to be me, her, and MyVerse. My manager at the time pulled in Carolina Dirty as well as J. Rawls. That’s how it all came out about, really. This was all Maja 7th – it all started with him.

TRHH: What was the recording process like with everybody being in different places?

Dominique Larue: I recorded with Rawls here in Columbus and everybody else recorded at their own studios. Everybody came up here in January and we recorded some stuff with Rawls, but by that time most of the stuff was done separately.

TRHH: There are some real strong lyrics on the single “Da Call Out”. What was the inspiration behind that song?

Dominique Larue: It was just more so about voicing your gripes. Me personally I just talked about how being a woman you’re automatically doubted when it comes to rapping. No one has ever heard you before or heard anything about you but they already have their preconceived notions that you’re trash.

TRHH: Why do you think that is?

Dominique Larue: I don’t know. I really don’t care to be honest. Maybe it’s their experiences? Maybe they experienced women who were trash? All of them. I don’t know. It doesn’t make me no never mind. This dude told me to my face, “Yeah, I don’t even wanna hear you rap ‘cause I know you wack.” He heard me rap and he apologized to me for the rest of the night. He bought be drinks, bought me food, and he was so sorry. But I don’t really care. That doesn’t make me feel anything. Maybe when I was younger, but with some of the things that I’ve been able to do that stuff doesn’t even matter to me anymore – I don’t care.

TRHH: How was doing Heresy different from doing your last album Grand with Maja 7th?

Dominique Larue: Aw, mad different. When you’re working on your own project you’re writing everything how you’re feeling it. You’re not writing with anyone else in mind.  When you’re putting together a project with other people you have to write with other people in mind. That shit’s kinda what it is. It was incredibly different and plus me and Maja were in contact almost every day with each other as far as putting the songs together and different ideas that we had. It’s a different creative process for sure.

TRHH: You’ve been in the rap game for a while now. Talk a little about your start in the business.

Dominique Larue: I’ve been rappin’ since I was 7. High school was probably when I started performing around Columbus. There is a DJ out here named DJ BHB. I started doing a lot of shows with him, especially after I graduated, after I had my son too in 2005. After I had him B used to come to the crib and record me. We would do shows and most of the time I wasn’t even on the bill. B would just throw me on stage to perform. After doing that for so long I just started coming into my own and going in my own direction. I got to the point where I was like, “It’s time for me to start doing more stuff outside of Columbus.”

Dominique Larue: It’s cool. It’s getting a little bit better. We actually had a pretty big Hip-Hop festival in July that was successful. We have this festival out here called ComFest and it’s been going on since the 70s. Hip-Hop is grossly under-represented and in the past year I was the only act at ComFest that had an emcee and two turntables. Some aspects are really under-represented. Every now and again we might have a monthly Hip-Hop show, but Hip-Hop shows are really few and far between. It’s dope that I’ve been able to perform as much as I have, but a lot of times when I do perform I’m the only Hip-Hop act. We do have a weekly here every Wednesday at #AtTheBreak. That might be the only consistent joint out right now. We got Blueprint, Illogic, Copywrite, J. Rawls, RJD2, we got people here. The scene is cool. It could be better. A lot of things don’t last long. I know BHB has the Hip Hop Expo and that’s been going on since the 90s.

Dominique Larue: Sam [laughs]. You’ve seen his movies, the man is a fuckin’ gem. He’s amazing. I was going to do a series where I started off with Sam Jackson, and then do Bernie Mac, and a couple of other people. I can’t remember which movie it was, but I was watching a movie of his in like 2010 and had the epiphany that I had to do an ode to Sam Jackson. He’s hilarious. The dude is in so many movies. He’s probably one of the few actor’s that has been in as many movies as he has. Every movie that he’s in, he has some kind of iconic line. He’s definitely one of my favorite actors – that’s my guy.

TRHH: You know you gotta do the Bernie Mac one [laughs].

Dominique Larue: Yeah, yeah. It’s definitely not on the radar right now. I got other stuff that I got going so, maybe one day.

TRHH: Talk a little about the stuff you got coming up.

Dominique Larue: I got an album with J. Rawls called “Almost There”. Kevin Nottingham’s label is going to put that out. I’m not sure when that will be out though – hopefully by the end of the year/beginning of next year. I’m doing a free project with my homie Dub MD called Blitzkrieg. I want that to drop after the Rawls project. My own album probably won’t be out until maybe a year from now. It’s called, “Smiling Because I Hate Everything.”

TRHH: [Laughs] Why do you hate everything?

Dominique Larue: It’s just a play on the stuff that I’ve been going through. I’m a really sarcastic, cynical person. I think it’s a funny title, too. Me and Maja are talking about linking back up again as well as me and D/Will. We did Carpe in 2010 and Diem in 2012. Me and D/Will’s project is called “Happiness is Imminent”. It don’t stop. I got all my licensing efforts, placing music. Lately it’s been a lot of TV shows I placed my music on, most recent Bad Girls Club. I placed on 6 or 7 different networks and a couple movies. So it don’t stop, at all. I’m doing my best to have my eggs in every basket. I have quite a few shows coming up, so I’m definitely working and staying busy.

Sherron Shabazz is a freelance writer with an intense passion for Hip-Hop culture. Sherron is your quintessential Hip-Hop snob, seeking to advance the future of the culture while fondly remembering its past.
View all posts by Sherron Shabazz →
This entry was posted in interview and tagged Carolina Dirty, Columbus, Da Call Out, Dominique Larue, Grand, Heresy, interview, Monie Love, MyVerse, Ohio, Polar Entertainment. Bookmark the permalink.