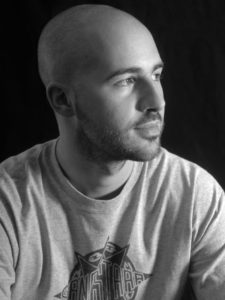 Belgian producer Koss takes an old school approach to producing. Using only an MPC and turntables, Koss has crafted a sound reminiscent of Hip-Hop’s golden era. The Liège native has history with emcees across the pond, which helped spawn a full-length album titled, “Born to Live.”

The Real Hip-Hop spoke to Koss about the Belgian Hip-Hop scene, his golden era approach to producing, and his new album, Born to Live.

TRHH: Why’d you name the new album Born to Live?

Koss: To me Born to Live was a state of mind like, just be what you are, find your own formula, do your best, and stay in a good state of mind. Just staying alive and trying to do your best with your own talent and to focus on it. Follow your intuition. Born to Live is pretty simple. It’s so simple that people forget that it’s hard to make simple things. This is what I tried to do with this album – focus on what I feel and collaborate with artists that I really appreciate and make it sound good.

TRHH: How did you link up with Masta Ace for “Longevity”?

Koss: I talked with Jerry [Graham] about it. Dennis is the owner of Below System Records and he already worked with Masta Ace before. I think he went in Jersey and met with Sensei a couple of years ago. I was in Amsterdam at Waxwell Records searching for psychedelic records. The owner went to his basement and came back with the record that I was searching for. I was listening to the samples and thought it fit perfect with Ace. I called Dennis and told him that I had the beat and I wanted to collaborate with Masta Ace. He directly contacted him and let me know. I started to e-mail with Ace about it and he said, “Okay, I’m down with you. Let’s do the song.” He wrote the first verse in Brazil because he was on tour with eMC. He finished the rest in New Jersey and sent me the song. He is the perfect example of longevity to me.

TRHH: What was the process like recording Born to Live? Was it the same way with every other artist?

Koss: Not really. I met most of the artists on the album from my first EP’s. To me it’s really important to meet the people that I work with to create that connection and that respect.  Like you, I really appreciate that you take the time for the culture and interview all these legends. It really means something to me.

Koss: No problem. Large Professor I tried to connect with last time, but he was on tour with Diamond D in Europe. I couldn’t meet him. Now he’s on tour with Main Source in Europe. I’m going to meet him later – we’ll see what happens. Most of the time I propose to them a theme for the song. We talk about it first, I send several beats, and they choose the beat that they want to work with. It’s really a collaboration. We talk about it and try to find an idea and a concept. It was pretty much the same thing with the other artists.

TRHH: Do you have a favorite verse on Born to Live?

Koss: I think the first verse from Large Professor. I like the energy that he put in the song. He recorded it pretty quick. He did it with his intuition and it comes fresh out of his cosmic mind. Sometimes the Professor talks with the planets. He’s on another level. I really appreciate how we talk about Hip-Hop and the culture after all these years. I’m really impressed to see how he still is addicted and passionate about Hip-Hop. He’s still connected to the culture – that’s amazing.

TRHH: How did you initially get into Hip-Hop?

Koss: This is a long story. This starts around ten years old or something. The background was Run-DMC, Notorious a little bit later, and Gang Starr. I fell in love with Gang Starr maybe between 15 and 19 years old. I discovered them later because I’m born in 87. I’m 30 years old actually, but I always love to learn the roots of the culture to be connected with the different musical forms that exist today. I connected with some French rap, too. There are some real interesting artists on the French scene. I told you, it was DMC, Notorious, and Gang Starr. I started to listen to the samples. I was really, really surprised as I was buying more and more records to discover that this culture is so universal.

Producers listen to psychedelic music, rock & roll, jazz, blues, funk, reggae, and fusion music. This message touched me because it was so powerful. I felt like it was a family and a connection. You can directly feel this when you talk to someone who fell in love with Hip-Hop too. This is something from the heart. I bought two turntables and started to collect records at 13-14. I was always digging and opening my mind more and more every day. That’s why Hip-Hop means something to me. It’s more than a lifestyle and more than a trend. This is a way to live. It’s a way to see and approach the world. It’s a beautiful thing.

Koss: I think that the most popular thing on the Belgian scene is trap music. There are artists like JeanJass, Caballero, Romeo Elvis, and L’Or Du Commun. They created a new scene and they came from freestyle and boom bap. They just evolved very quickly with the music. I can’t go so quick with the trap evolution. I start to listen and open my mind to see what is good and this new way to produce Hip-Hop. I think that the Belgian scene has not so much recognition – this comes really slowly. Now they are on the map, because internationally when people start to hear about the artists, they are like craft men.

They are not so popular so they still focus on the purpose of why you want to be artists and produce music. They don’t think about being famous, they really want to express their souls and their message. I think Belgium is a good school to be an artist because it forces you to stay humble, create your own music, and share it with the people on a human level. I told you, this is a craft man country. People are doing their own thing with love. That’s positive. I think that Belgium has a good future for music.

TRHH: Is coming out of that culture the reason why you still use an MPC and turntables?

Koss: Like I told you for Born to Live, I think that for me it was very important to feel the culture in my hands. I use vinyl to touch the samples and to feel the musicians. I chop it up with the MPC because these ancestors are our roots, and to directly put it in front of you on the 16 pads and play with it is a way to pay homage. I really feel this simple way to do music, because it pushes me to be more creative. There are so many plugins with the computers, programs, drum machines, and even the mixers.

Back in the day it was two Technics turntables and the Vestax mixer. It’s incredible how the Hip-Hop scene was created with this simple set up. I’m really impressed about it still today. I want to keep this state of mind to bring the best out of me and to not lose myself to technology. They want us to buy so many things, but we don’t need so many things. It’s pretty good to stay on the human level with the basics and just to try to put our souls through our instruments.

TRHH: You’ve produced EP’s for Craig G and AG, but if you could produce an entire album for one emcee who would it be?

Koss: Good question. I was always a huge fan of O.C. from D.I.T.C. He always impressed me with his flow, his style, his aura, and charisma. Maybe O.C. I’m still impressed about A-F-R-O. He is on another level. With the longevity O.C. is someone that I really respect, too.

TRHH: What’s next for Koss?

Koss: I’m working on a soundtrack. It’s going to be instrumental. I’ve invited a few producers, but most of the productions are mine. I’m going to do the cuts and put a little voices on it to create the atmosphere. We have a movie in our head with our little crew. I just want to get the images and feel how I can represent this mood with my music. This is my next challenge for the moment. Now it’s just random like, “Let’s do this beat,” or “Poet fits to this beat, so let’s do it with Poet,” or “Let’s make a banger, let’s make a cool song, or let’s make a paying homage song.” It was about freedom – I was totally free. Now musically I want to start my creations from images and scenes to have a different approach about music and have a different perspective. Like Adrian Younge, he’s crazy and the way he produces music really impresses me. I think that’s going to be the next challenge for Koss.

Sherron Shabazz is a freelance writer with an intense passion for Hip-Hop culture. Sherron is your quintessential Hip-Hop snob, seeking to advance the future of the culture while fondly remembering its past.
View all posts by Sherron Shabazz →
This entry was posted in interview and tagged Belgium, Below System Records, Born to Live, interview, Koss, Liège, Longevity, Slice of Spice Records. Bookmark the permalink.