Posted on October 8, 2018 by Sherron Shabazz 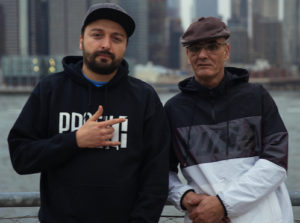 French production duo Zoom & Rectape dropped their debut album in early 2018, “Delivery.” The album boasts musical styles that will appeal to Hip-Hop fans from many different eras. Their soundscapes fit in perfectly with today’s hottest rap artists and the boom bap artists of the 90s.

The Real Hip-Hop spoke to one half of the French duo, Rectape, about his partnership with Zoom, working with American artists, and their new album, Delivery.

TRHH: How did you and Zoom become a production team?

Rectape: We became a team by meeting in a pool of producers named The 13th Looters. We’ve been reunited by a guy here in Strasbourg named Frankie Chops. We made vinyl for Frankie Chops 1 and 2. It’s an instrumental album with a lot of beat makers. That’s how we met. Zoom is the old school guy here in the east of France. From the 80s he was a DJ and he has an enormous collection of vinyl. He’s a real digger of all kinds of music. His problem was with technology and being able to put his samples or ideas into place. He’s not that good with software so I helped him. I have a studio where I do mixing and mastering as my day job. I know a lot of software. I’m producing myself so I helped him. Finally, we ended up liking what we were doing. We were doing it the best way possible by putting it through old school samplers. It’s a bit of an old school way with this approach. We are not sampling through YouTube, putting it in live, and straight away making a beat. We really wanted to start from vinyl to samplers and then we go to the software, so we get the color of the hardware samplers.

After that I had some connections and met people by contacting them over the internet and social media. I made some connections in New York when I visited. I’ve been there four or five times. It’s not that I have a lot of people there, but I made some connections. The goal was not only old school boom bap. It’s where we’re from and what we like, but we wanted to put something more on that. We wanted to have features with people that we respect a lot and love like Masta Ace, Big Shug, and Edo G. Masta Ace is a favorite, for sure. We had some newcomers like Shine Sinatra and Dizzy Senze – she is a female emcee that is winning a lot of battles right now in New York. We did a collab with the guys that we respect and some connections where we were able to put the project where we wanted to. Everything came together because we’re passionate. We’re not making this for commercial results. We wanted to be satisfied with the end product from start to finish – from the visual, to the cover, to the mastering, and mixing. It took a lot of effort but we’re really satisfied with the results. Now the problem for us being independent is we don’t have support for the commercial side of things.

TRHH: How do you plan to make up for the fact that you don’t have the commercial support?

Rectape: We don’t have a choice. We are contacting people the old way. It’s tough because sometimes you contact people on social media and it’s a decent amount of dollars just to get an article or something like that. It’s tough because we put everything that we’ve got into this. It’s independent 100%. We don’t have a company behind us so everything is our own work and our own money. We are short now to push the album. It’s most important for people to hear it. We’ve gotten good feedback and the people that hear it like it. Our problem is more people could hear it. We contacted this guy Dub who sent you the e-mail blast. We’re doing what we can do for now.

TRHH: You worked with Masta Ace on ‘Smart Dummies,’ did you meet him on your trips to New York?

Rectape: No because the time we were in New York he was touring in Europe. What we did was we found a date where he was touring near Strasbourg. He was in Heidelberg, which is like a two hour drive from us. We found a way to get there one day before his show so we had the time to do a video in Mannheim. Mannheim is a city in Germany just near Heidelberg where he was touring. We had the opportunity to meet him and shoot the video there – not in Brooklyn. I sent him the beat and he recorded from his studio and sent us the vocals.

TRHH: Why did you call the album ‘Delivery’?

Rectape: We had some tracks already done. I had to find something because my man is not really good with English. When we were in New York with Shine Sinatra and we made the video, he sent us the vocals the day before we shot the video. He was like, “Did you like it?” because it really meant a lot to me to deliver the right thing. There was this notion of delivering the rapping, the flow, and the visual. I thought about “delivery” to give things properly to the people. Deliver the goods, the music, and the vibe that we got. Searching the web I got the idea of a van with graffiti on it. I thought it would be great with putting the artist’s names on the van. On the inside of the vinyl when you open it there is a map with the steps to the final delivery. I really put chronologically how things were done from the first meeting, cooking some beats, to the first emcee we met, finally going to New York, shooting the clips, returning, and even the pressing of the vinyl. All of these steps were done and it was one concept behind it. You can see it on the cover and in the name.

TRHH: How long did it take you to complete Delivery?

Rectape: It was about one year and a half total from the first beats to receiving the vinyl.

TRHH: Earlier you mentioned working with hardware, what does your workstation consist of currently?

Rectape: On the software side is Studio One. Before going to Studio One I’m going through samplers. We got drums from the Akai S100. We also have the E-mu EIII. For the drums it was the Akai S100, for the samples it was the E-mu EIII. I have the luck to not just recording the sample, but recording the sample through a compressor and an EQ. For me it’s really important. It’s the same when I’m recording vocals. Before you mix is really the foundation, so it’s gotta be right from the beginning. We put attention toward this and it’s slower than taking something from the web. I’m cool with that and it’s really quicker. I come from the school where if you put it in the right order and make it right it will sound satisfying to my ear.

TRHH: How did the song ‘Arson’ with Shine Sinatra come together?

Rectape: This one is really funny because it was the quickest beat we made for the album. It was really as simple as a session, a really good sample he brought me, put hard drums on it, and it was done like that. We sent him different beats before. At first some beats he was not that good with. When we sent him this he directly clicked on it and things were fast even for him to put the rap on it. It was a fast one. On the album we have boom bap, and this one is really the boom bap old school style. We have other songs that are more advanced in production styles. There are different styles on the LP and we are okay with that. Even if they are different there is a line from beginning to end. We took time even with the track listing to make it cohesive for the whole project. The song ‘Arson’ was magical for us. We didn’t have to put as much time as other songs because it was right off the bat strong and hitting hard. It’s really a simple beat, but efficient.

Rectape: Right now it’s hard to tell. I have a lot of rappers that I love. The one I regret is Sean Price. If it were possible, Sean Price. He’s my favorite emcee.

TRHH: Why is he your favorite?

Rectape: Because for me since the day of Heltah Skeltah’s Nocturnal he was always a beast with the flow and the punchlines were amazing. One thing that’s in my life principle is being true to yourself. There are so many rappers that are playing a role and he didn’t need it. He was cool being himself. You can feel it. It’s something you can feel. When I’m listening I know if people are playing games or not and this guy was not. The skills, the rawness, and the funny side of it, too. He made fun of himself. For me he was my biggest rapper. Every time you hear him on a collaboration it’s like even if there are other strong emcees on the track when he’s there, there is something going on. It’s like the other emcees aren’t even on the track.

TRHH: What do you hope to achieve with Delivery?

Rectape: I would love to get some recognition from the people who are really into the movement if I can touch people. We’ve gotten great feedback. I’m really happy with that. When I meet some people they tell me about it and how they’ve been touched by it, it’s really satisfying for me, because that’s what we want. We want people to feel things – it’s as simple as that. We know there aren’t millions to sell, it’s really to touch the people that are into this movement. It’s hard to explain. We are happy to touch people. What we want is to have the maximum visibility so we can continue putting out other projects and growing. We know it’s not with one project that we will get a big crowd – if you have promotion it’s possible. We talked with M-Dot and he said it’s kind of a marathon. It’s a long-term thing. You have to put out project, and project, and project. Some of the biggest artists that we like, like Masta Ace or Sean P, they didn’t have the respect that they deserved but they always kept the work coming and we do respect that so much.

Sherron Shabazz is a freelance writer with an intense passion for Hip-Hop culture. Sherron is your quintessential Hip-Hop snob, seeking to advance the future of the culture while fondly remembering its past.
View all posts by Sherron Shabazz →
This entry was posted in interview and tagged Arson, Delivery, France, interview, Rectape, Smart Dummies, Strasbourg, Zoom, Zoom & Rectape. Bookmark the permalink.